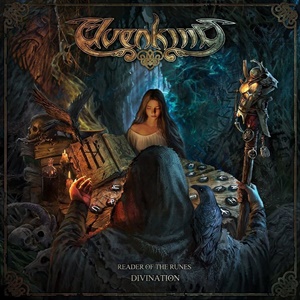 Ten studio albums in now, Italian folk power metal unit Elvenking seek to drive their creative force to another level – as Reader of the Ruins – Divination is the first chapter of a longer conceptual story, an adventurous journey into a mystic world of runes, magic, and ancient powers light years away from the visible. The sextet has developed an intriguing, melodic sound that pays homage to their diverse influences as a passionate cocktail – featuring plenty of catchy, remarkable passages on both the music and vocal fronts.

There’s an immediacy to the songwriting right away as well as proper syncopation and push/pull element from guitarists Aydan and Rafahel to violinist Lethien to develop some hypnotic parts that simmer and stay cemented in the recesses of your mind. It’s evident that “Divination” contains the proper audience call and response element beyond the power/cultural hooks to become an Elvenking staple, while the mid-tempo marching follow-up “Silverseal” gives Lethien a chance to stretch his folk chops, as latest drummer Lancs subtly sits back into a comfortable groove while executing fluid kit action when necessary. Acoustic guitars and semi-jazzy piano, heavier electric guitar tones, swirling supplementary orchestration or narrative themes enhance the crux of Elvenking’s ideas and performances – an inner confidence appears in assembling all the diversity and making the songwriting flow in a consistent, cohesive manner. It’s hard not to transport yourself centuries back when taking in the acoustic/violin combinations against the dual female/male vocals for “Eternal Eleanor”, the electric underpinning not overwhelming but consistent with the folk atmosphere delivered here. Even extreme blasting and symphonic overtones make “Malefica Doctrine” one of the heaviest songs in the Elvenking catalog – a great uptick energy-wise during the back half for the album.

Most of the material is rather tight and to the point, but the almost eleven-minute “Reader of the Ruins – Book 1” throws the veritable musical kitchen stew at the listener – choirs, majesty, splendor, and celebration abound. Again throwing around some tremolo picking and darker atmosphere in spots adds to the inherent traveling escapade the arrangement takes the listener into, the quieter piano that trails off to its conclusion setting the stage for the next chapter to come. In the grand scheme of the band’s strong discography, Reader of the Ruins – Divination will be another welcome addition for Elvenking followers – young and old. Since 2014’s The Pagan Manifesto, they’ve set the bar high in their multi-layered folk/power metal ways, and consistently hit it out of the park.