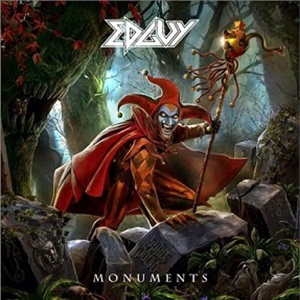 Hard to tell these days what’s the priority for Tobias Sammet. His bread and butter used to be power metal unit Edguy – until his metal opera project Avantasia also developed into a headline attraction. Shifting back and forth between the two seems to be the norm – productive enough with songwriting ideas to separate the workload accordingly. Celebrating their silver, 25th anniversary as a band, Monuments captures new songs, old songs, band favorites, and a previously unreleased Edguy early recording as a 28 song, double audio disc compilation (packaged with a live DVD from the Hellfire Club tour and promo videos).

Getting to the fresh material first, the five new songs encompass everything from the old power era of the group as well as their recent more ‘fun hard rock’ explorations that took shape on Rocket Ride forward. “Ravenblack” has this darker main riff while the chorus is quite uplifting, and “Open Sesame” is a catchy, fun rocker with Tobias rearing back for some spirited, bluesy high-octane melodies. Their love of Helloween remains obvious for the twin guitar harmonies that burst forth for “The Mountaineer”, paying homage to “Future World” and “I Want Out” while the main lead break could bring tears as well as sing-a-longs. Choices vary for what Edguy consider ‘the best’ with ten studio records to pick from – there’s no denying the wah-wah/double bass infused “Defenders of the Crown”, the epic skills of “The Piper Never Dies”, or the mid-tempo, 80’s-oriented anthem “Superheroes”. Many in North America probably didn’t discover Edguy during the Vain Glory Opera record as this scribe felt fortunate to, so hearing “Out of Control” (guest vocals with Hansi of Blind Guardian) and the title cut are welcome additions to the track listing. And for those that feel the need for speed, “Babylon” off Theater of Salvation remains quintessential to your power cravings.

You rarely get to look back at a wealth of material as Edguy can still in their thirties – Monuments a treasure trove of the growth and exploration for Teutonic melodic power metal and hard rock. A limited- edition version even includes a 160-page coffee-table book tackling the history of the group in words and photos. One for old-timers or virgins entering the Edguy fold – as we can only hope they’ll hit rarefied golden anniversary status by 2042.