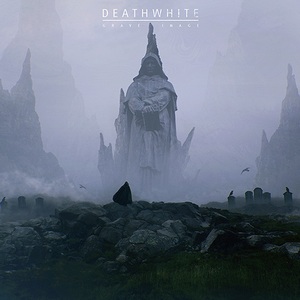 Just as mysterious as their dark, hooded figure that has adorned much of their discography to date, Deathwhite operate in the shadows. But anonymity hasn’t stopped them from catching a bit of underground buzz, due to their dedication to doom & gloom – particularly the atypical variety that places an emphasis on emotive vocals. Grave Image works as both a continuation of the formula set with previous efforts while also injecting some fresh energy into the mix.

There’s a few things that stand out with Deathwhite’s second full-length as one continues to listen to it. The most evident is that it’s a little heavier. While they’ve stayed true to the ‘clean vocals only’ formula, the guitars have a tendency to stand out more than in the past. The band has added a second guitarist, and the brilliant but not too showy solos that they’ve employed on tracks like “Words of Dead Men“ or the title track add to the contrast without offsetting the darker mood. The extra crunch to the guitars is pleasing, and “In Eclipse” features some truly headbang-worthy riffs that tout aggression as much as they do sorrow. The second stand out are the vocals. The band has continued to raise their own bar with each release, and raw emotion is at its peak with a number of the tracks. The debatable highlight in this regard is “No Horizon,” which builds to a gorgeously morose chorus featuring snarling guitars and the potent line “Open up my eyes.” That is another one of the band’s most effective abilities – being able to make something emotive without becoming saccharine or playing into more poppy formulas. While the near-upbeat Katatonia-esque drive of “Plague of Virtue” is no doubt infectious, it relies almost as much on the riffwork as it does the vocals, making it a more cerebral indulgence. In that same sense, the lyrics have a similar effect, dabbling into the problems and hypocrisy of the modern world while giving it that more personal and affective touch.

Now two albums (and two EPs) in, few are more effective at drowning the listener in a melancholic state than Deathwhite. They continue to pull from their influences yet grow more bold in pushing the melodies and vocal presence forward while increasing their sonic palette. Grave Image maintains a solemn yet sprawling tone, with some moments of ethereal payoff that work as the icing to their dark and dreary cake. Perfect music for staring into the void during a winter storm, or an isolating late evening drive where you can reflect upon the bleakness of it all.