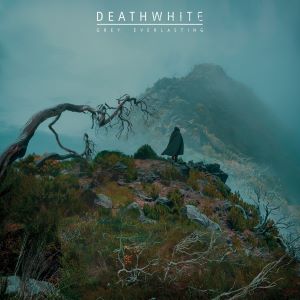 What happens when you take a band that’s already noted for being bleak and gloomy and have them record during a global pandemic?  The answer is clearly not sunshine and rainbows with a title like Grey Everlasting.  Instead Deathwhite take a turn for the even gloomier and downtrodden with their third full-length effort in the last decade.  Thankfully, this plays right into the band’s strengths though it might mean that some listeners may need to give the album a bit more breathing time to really see the fruits of Deathwhite’s labor.

Often referenced with bands like Katatonia, Paradise Lost, and Anathema, it seems that the percentages have shifted a bit with Grey Everlasting.  The Anathema vibes feel stronger on some tracks, most notably the more mellow and pensive ones such as the more relaxed sorrow of “Blood and Ruin” (you can feel the hope melt away in the closing melodic riff) or the solemn and doomy title track, where there is a more minimal approach to the riffing, allowing the melancholy to really bubble up to the surface.  There’s a more introspective feel to many of the tracks, not needing to really buckle down with heaviness with each track – only the emotional kind.  On the other hand, “Earthtomb” opens the release up with blastbeats and swirling, almost black metal-esque riffing before the sadness kicks in.  The same could be said for “White Sleep,” which has a galloping/storming riff to it, along with some shouted vocals at the song’s climax.  Outside of those extremes, there’s more delightfully depressive Deathwhite fare to be had.  “No Thought or Memory” hits all the right notes for the band, with a heavy emotional weight to it while still being a chorus that will stick with you after it’s over.  In that regard, the album’s highlight has to be that of “Quietly, Suddenly.”  With a sprawling, emotive chorus that sits alongside some somber yet catchy riffs, it’s all you can do to not sing along.

Deathwhite continue to be on the top of their game when it comes to writing the soundtrack to hopelessness and despair.  Grey Everlasting manages to deliver music that will darken one’s surroundings but somehow lift the spirits with it’s emotional tug on the heartstrings at times.  Riveting music to get you through life’s not so pleasant moments.