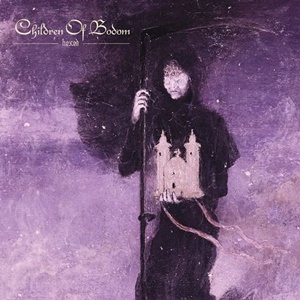 Well-established for their melodic death/power metal blend that features the raspy screams of vocalist Alexi Laiho and his guitar pyrotechnics in unison with the keyboard agility of Janne Warman, Children of Bodom have been a going entity for 22 years plus – as Hexed is the band’s tenth studio album. We all could pick out favorites (Hatebreeder and Follow the Reaper here), and the occasional platter or two we don’t necessarily spend as much time with (check Are You Dead Yet? for that synopsis), but it’s evident that most people into the group have stayed the course throughout their career. When you’ve laid the foundation, it’s more about preaching to the choir and spicing things up with occasional curves just to pique interest – and that’s where this record achieves its balance, as there are some tasty hooks and headbanging riffs against the venom and vitriol that is CoB.

The opening double salvo of “This Road” and “Under Grass and Clover” (the first two singles) keep the eyes on the prize- face melting riffs with heroic-oriented accents instrumentally, double kick propulsion at a variety of tempos from comforting to ball busting, and Alexi’s venomous roar sailing over the top. Horror-like keyboard tones and a stunted guitar/drum interplay carries “Hecate’s Nightmare”, the solo incorporating bluesy Zakk Wylde-like aspects against fluid shred propensities. Those who love charging speed rhythms and melodic death/thrash tempos while injecting a few neoclassical twin keyboard/guitar runs, well the title track should appease your aural wishes – the gang-fused chorus consisting of the one word title. The band appear comfortable to explore those grey areas when it comes to groove combinations and transitions – understanding the need for listeners to rally around specific chord progressions to build them out, as “Say Never Look Back” contains numerous circular passages that could go down a storm during festival season as well as some thunderous drum fill work from Jaska W. Raatikainen.

Hexed doesn’t stray far from the Children of Bodom template – maybe venturing a bit more into those mid-tempo anthem aspects that power/melodic death mavens treasure, while reminding old-timers from time to time they can push the accelerator when needed. And as a result, giving the band plenty of opportunity to test this material out on the road where they dominate.