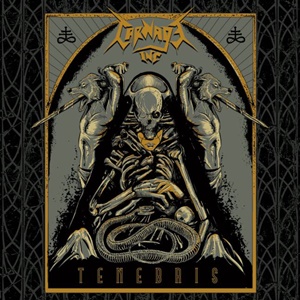 A second creative take on the ‘second Dark Age’, Carnage Inc. are a quartet of musicians from India, following up their debut EP Fury Incarnate from 2016 with this full-length Tenebris. The skull and snake-adorned cover art provides interesting symbolism for the contents, as the band skirt around multiple genres of thrash and modern groove metal throughout these eight tracks – exuding obvious affinities for many Bay Area thrash acts while keeping their ears to the underground for current inspiration to add to the mix.

The thrash influences come into focus through gang-infused choruses, mid-tempo rhythms that swing with a Metallica / Slayer slant, but there is also a bit of that latter day Sepultura punch to the proceedings. Check out the thunderous fills and steady crunchy riffs for “Eradicate the Empire” to understand that Carnage Inc. have studied a fair amount of their heroes to know what works sonically. When the band chooses to go for a bigger groove aspect, that’s where some of the Pantera or Mastadon-like segments appear, such as the main instrumental hooks and chorus within “Death Scape”. Rhythm guitarist Varun Panchal as a vocalist has a decent grasp of his mid-range and fierce screams, a bit raspy and probably not the most potent voice you’ll hear in the genre (think a weaker Grip Inc. here), but he does a serviceable job and even gets a chance to flex his clean melodies during the closing semi-ballad “Tread the Fire”. The lead work from Navin Mudaliyar has that fluid arpeggio proficiency that vaulted Alex S. from Testament to the top of his class. Conversely, there are times where Carnage Inc. get too mechanical/ predictable with some of their hooks and transitions to mirror their heroes a bit too closely – “Saffron Is the New Black” probably the easiest culprit even through the insane instrumental section as you can pick out specific Araya/Slayer combinations verbatim.

Talent and ability are present, and no one can ever take that away from these gentlemen. It’s just Tenebris could have been that much stronger if the band were a bit more critical in their execution and songwriting, and hopefully this will be taken into consideration on the next effort. 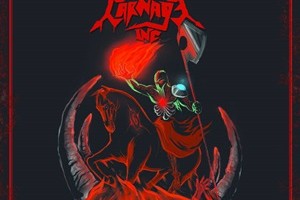