Artlantica – Across the Seven Seas (SPV/Steamhammer)

Tuesday, 7th May 2013 By Kenneth Gallant 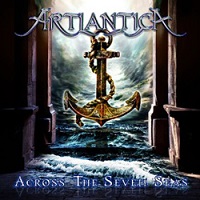 I would think the natural inclination is to say Arltantica is a super group when you consider the pedigrees of everyone involved in the project. Vocalist John West has been associated with Artension, Royal Hunt and Angel of Eden, and guitarist Roger Stafflebach was also a part of Angel of Eden, too. The group’s keyboardist is Mistheria and he has made a name by playing with Bruce Dickenson and Bob Rock on previous collaborations. Joining the trio are Dani Loble (Helloween) and John Macaluso (Yngwie Malmsteen, TNT) on drums, Steve DiGiorio (Sadus, Testament) on bass and Chris Caffery (Savatage) has been added as a guest guitarist. The question is, how does this comes across in the group’s first full length release, Across the Seven Seas?

That question is firmly answered on the opening track “2012” with the thrashy overtones taking center stage, thus proving this group is ready for action. What follows is a series of elegant power metal songs endowed in majestic, groovy and melodic passages to make Across the Seven Seas a strong debut. There are some brilliant moments, specifically the sprawling epic sound on “Across the Seven Seas”, and the driving rhythm and scorching pace of “Fight for the Light.” Then on “Demon in my Mind” West’s commanding vocals demands much from the listener, but the crowning moment is Stafflebach’s virtuoso performance on the instrumental track “Return of the Pharaoh Pt 3.”

Artlantica is indeed a supergroup, and with West, Stafflebach and Mistheria collaborating on a project of this magnitude, big things seem to be looming on the horizon. Across the Seven Seas proves that power metal can still be seen as a viable genre, despite the saturation of bands utilizing a similar sound. This is elegant music for the most part, and I expect bigger things to happen down the road as a result of this.