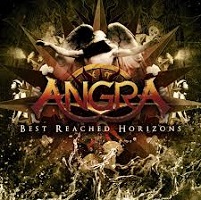 Angra have been around for 20 years, despite the well publicized split within the band in 2000. Vocalist Andre Matos and guitarist Luis Mariutti and drummer Ricardo Confessori joined together to form Shaman, while the remaining members were left to pick up the pieces. Eventually the band regrouped and released a string of quality releases with replacement vocalist Edu Falaschi (who has since departed the band in early 2012).

The band is now set to release a new two disc set celebrating the different eras of Angra with both vocalists at the helm. Simply titled Best Reached Horizons the compilation serves as an opportunity to showcase what Matos and Falaschi each accomplished during their times fronting this great power/progressive metal act.

Disc one concentrates mostly on the songs of the first three albums plus the various EP’s that followed. Songs like “Carry On” and “Angels Cry” are catchy and widely melodic tracks that showcase the true spirit of Andre’s majestic and soaring vocals. Then you get strong numbers like “Holy Lands” and “Freedom Call” that push their progressive sound to the brink of perfection. The song selection is then capped off with the powerful Ballad “Lisbon” and “Metal Icarus” which is probably the most infectious song of that era, bringing the first disc to a pleasurable close.

Disc two begins with “Nova Era,” a pulse-pounding number that ups the ante with the power metal sound and nearly obliterates the progressive elements from their song structures in the process. It’s definitely a change of pace as we cruise into such numbers like “Hunters and Prey” and “Waiting Silence” that sees the band building towards more traditional foundations. Obviously, with Falaschi fronting the band, the music leans more into a realm of fairly heavy sounding rock, but keeping a smidgen of that progressive edge into the mix. You will definitely notice the changes to the band’s style once you hear songs like “Salvation Suicide” and “Lease of Life.” None of it is bad, but you can tell the music isn’t as majestic as the on the earlier albums.

Overall though, Best Reached Horizons is a fairly standard release. None of the songs have been remastered, nor is there a truly rare track to be found on this release to entice longtime fans. For me the hook is the comparison of both vocalists, so it was a treat to go through the songs from the beginning and follow the evolution of the band over last twenty years. Angra have had their ups and downs, but after listening to this compilation it’s safe to say the quality of the music has always remained high.