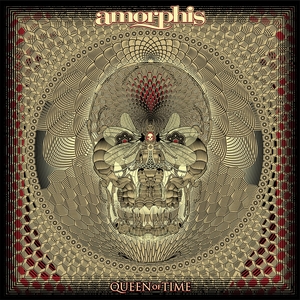 More than anything else, Queen of Time is a record that is going to make long-time Amorphis fans smile. Hitting play on the opening number “The Bee” should be all it takes to accomplish this. From the notably heavy riffing (and Tomi Joutsen’s ever-consistent/excellent growls), to the shimmering and progressive melodies in the chorus (again, with Joutsen’s equally enjoyable cleans – one of the few that pull off both with compelling finesse), Amorphis generates some contrasts that should make many bands ripe with envy. The band embraces its folkier side, something they’ve done more of in recent albums, with “Message in the Amber” and “We Accursed” (which features Eluveitie’s Chrigal Glanzmann) really raising the flag upwards in terms of their ambition. There’s also more of the Middle Eastern flair, with “Grain of Sand” coming across as the most direct in this nature, with some floaty and glorious sounding melodies alongside a few real headbanging moments.

If one looks to the progressive (and perhaps even mainstream), “Wrong Direction” is one of the most flat-out ingenious songs that Amorphis has pulled off to date, with a rather catchy chorus and near modern structuring – yet it retains a uniquely Amorphis flair that is not only going to thrill the fanbase, but potentially open the floodgates to even more new initiates. Oddly, even this admittedly grandiose track only paves the way for arguably the album’s highlight in “Amongst Stars.” A duet with Anneke van Giersbergen, there’s just the right amount of sentiment and soaring melodies as the duo engages in a magnificent back-and-forth on the vocals – an utter showstopper if there was one. To give in to clichés, each track brings forth no less than a few moments that you are bound to want to return to, but in reality, there’s a genuine emotion to each of the songs within, all done with a sense of looking through Amorphis’ storied past, while still contributing to their future.