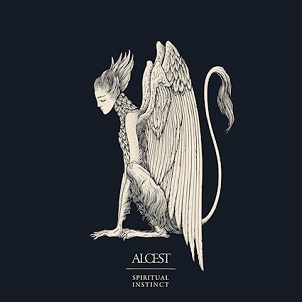 More than ten years after the fact, the promotional picture of Alcest mainman Stéphane “Neige” Paut standing all singular and humble, head down and hands folded for the Souvenirs d’un autre monde album still resonates. Surely Neige had no idea at the time of the floodgates his band would help open with blackgaze, a term that Alcest still hovers around but is not quite in total, full embrace like days of yore. After a quick break from it with 2014’s Shelter, Alcest rather emphatically returned to the fray with 2016’s excellent Kodama, thus, setting up Spiritual Instinct, their first album for Nuclear Blast.

The jump to Nuclear Blast coincides with a smattering of heavier elements. Now, sure, “heavier” and “Alcest” must be taken into context, for Neige’s clean vocals are still light and feathery, often pumped up with echo (and sung in French). But, the occasional jostle with black metal still happens and happens early on opener “Les jardins de minuit,” where tremolo razing and snare mashing from Winterhalter take form. Lead single “Protection” is the best song of the lot, working in those colliding, caressing chord structures to go along with the indie rock elements that are so intrinsic to Alcest’s sound.

Alcest has never been at their best when going soft, and “Sapphire” is emblematic of that, no matter the uplifting chorus that comprises of Neige’s made-up language. The album’s centerpiece is “L’île des morts,” which is one of the band’s patented catch-all numbers where Neige mashes up everything in the band’s sonic-verse to massive effect, while the slow, climatic build-up of “Le Miroir” sets the table for the closing title track, a cut that finds Alcest in full stride with their melancholic side.

Back to that picture: It’s both easy and hard to fathom Alcest’s ascent. For as much as they are pack leaders, they’ve always amounted to an acquired taste. Then again, you factor in their unparalleled grip on atmosphere and scene-leading aesthetic, then, yeah, it’s really not that hard to fathom at all. Spiritual Instinct uses up everything that brought Alcest to the big dance in the first place.