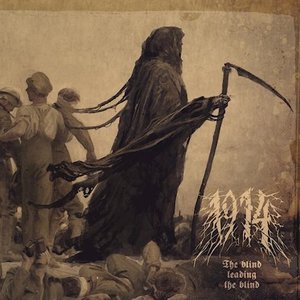 Given the success of bands like Hail of Bullets and God Dethroned leading the charge, there’s an uptick in WWI-themed topics in extreme metal. If it wasn’t clear by the year of this particular band’s name in question, 1914 is all about The Great War. Originally released last year (on the 100th anniversary of the armistice of WWI no less), 1914’s signing to Napalm called for a wider release.

What makes 1914 any different than other themed extreme metal bands? Well, The Blind Leading the Blind is completely immersed in WWI. Numerous samples sit throughout the album (not to mention the intro/outro), which provide that extra sensation on top of the lyrical content to make sure you consistently realize you aren’t listening to the usual gore/sci-fi-driven affair. While some can be more lengthy than desired as you listen to it repeatedly (“The Hundred Days Offensive” for instance), they do work to bring you into the material. Outside of that, the album operates on a fairly simplistic and mostly effective premise – delivering a plateful of meaty riffs. The band’s sound is clearly rooted in death metal, but some shades of black, sludge, and even some post- influences give the band plenty of variety to work with. You can take their cover of The Exploited’s “Beat the Bastards,” with its decadent black metal core and you’d never take it for someone else’s song, or listen to them shift gears from more looming doom-ridden terror to outright death metal onslaught on “A7V Mephisto” with equal entertainment. Riffs push things forward in any situation, and the strength here is what will inevitably keep you listening along. If there’s one gripe to be had though, several tracks stay a bit past their prime (particularly when loaded up with some samples), but it’s a minor fault.

Overall, The Blind Leading the Blind should please history buffs as well as extreme metal listeners. The content is there to provide a solid dose of history, and the riffs make sure you won’t mind coming back for a mix of atmospheric dread, bulldozing riffs, and just enough melody to keep listeners satiated.