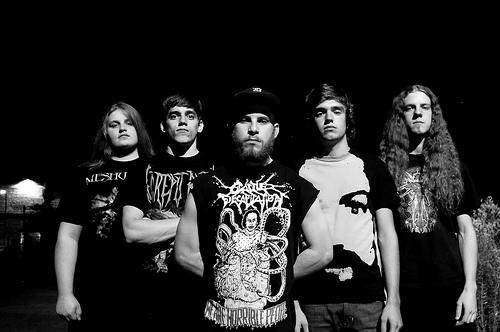 Pennsylvania’s RIVERS OF NIHIL have completed work on their debut full length album, The Conscious Seed of Light, which will be released in North American on October 15th.

he album was recorded in March of 2013 at Mana Recording Studios in Florida with famed metal producer/musician Erik Rutan. Guitarist Brody Uttley said, “Working with Erik was a true privilege. Coming from the DIY circuit and immediately recording with one of greatest death metal producers of all time pushed us all more than we ever could have expected, both as musicians and as people. We have grown tremendously as a band in all aspects because of our experience with Erik.”

Artwork for the band’s debut full-length was handled by famed cover artist, Dan Seagrave, whose portfolio includes covers for MORBID ANGEL, ENTOMBED, SUFFOCATION, and DECREPIT BIRTH. RIVERS OF NIHIL ended up sending a brief treatment of the record that included a description of the album with song titles, a few lyrics, etc. to a number of artists the band admires. Every one of the artists seemed interested to a degree; however, it was Dan Seagrave who really seemed like he understood and appreciated what it was the band was going for. And as Brody says, “he really tore into it! What we see on the cover is a landscape of a world that doesn’t need mankind, we are relics here, and the sun is the only true master.”