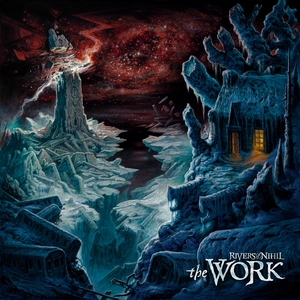 After the release of their third album, Where Owls Know My Name, Rivers of Nihil became a very buzzworthy act.  For good reason, with their seemingly uncanny ability to merge pulverizing death metal with proggy instrumentation and a deep dive into emotional territory in a way that few extreme metal acts could pull off so genuinely.  So the question begs, “How do you follow up such a massively successful release?” and the answer, according to The Work, is to further push the boundaries of what Rivers has established, even at the risk of losing some extremity (and potentially, fans) in the process.

The Work will undoubtedly be a polarizing release that divides the extreme metal community for its brazen disregard to play by the rules.  There will be many (this scribe included), who give The Work that first initial spin and shout, “What the hell happened here?” throughout the album.  Make no mistake, there’s a lot of new territory that Rivers of Nihil explores on this album and it will take some time and patience to really process it all.  But for those excited by that prospect, The Work is made for you.  Starting off with the gentle intro of “The Tower (Theme from The Work),” it does an excellent job of capturing this cinematic quality that sweeps you into a dark and melancholic winter world that occasionally provides some warmth and sunlight.

More so than any release that they have done, those clichéd terms of ‘adventure’ and ‘journey’ come to mind with 100% legitimacy.  After a slowburning and dreamy beginning, “Dreaming Black Clockwork” will perk the ears with its more menacing and mechanical grooving riffs.  Murky, sludgy riffs and battering blasts will allow some to enjoy a moment of familiarity, even if it’s laced with greater esoteric vibes.  Thus allowing the beautiful “Wait” to sweep you off your feet with its whimsical and introspective wanderings, which begin to feel more psychedelic and proggy as the track increases its heaviness ever so slightly in its second half, culminating with some triumphant sounding guitar leads.

To continue onward with an extensive, track by track commentary would ruin some of the initial fun of what the band did in this set-up, but expect many twists and turns as the album continues to roll along.  That said, a few more tracks are worth mentioning in small detail for some varied reasons.  “MORE?” will sit as the ‘what if’ argument of the album, a 3-minute scorcher of a track that is chockful of blastbeats and savage riffing, yet brought up to the next level and will make some wonder why they couldn’t have just done a whole album like that track.

The answer to that is a simple one, because we wouldn’t end up with the beauty that is “One More Day.”  The band has pulled no punches in providing some really poignant moments (the climax of “Circles in the Sky” is permanently etched into this scribe’s mind here), and they have truly outdone themselves with this track.  Hitting with that Devin Townsend-esque level of intimacy and introspection, it’s a truly moving track that is bound to resonate with many a listener with the combination of raw, somber lyrics and warming, acoustic-driven musicianship with delicate leads intertwined.  Lastly is the sullen “Episode,” which all but floats through a dreary yet captivating soundscape that trades off with some throttling blasts and dissonant riffs with a touch of playful leadwork holding it altogether.

All of this so far hasn’t even touched upon the utilization of the saxophone this time around, which feels to be an even stronger and more potent implementation (as more of a texture than upfront employment), or the way the tracks seamlessly flow together to provide a continued narrative as you continue along the journey (with some callbacks to the “theme” as well).  Rivers of Nihil have designed an album that is destined for long-term dissections and discussions.  With no less than 20 full spins at the date of writing, there’s still little things to discover and analyze.  They have hit fertile territory that is definitively their own – no need for mere classifications or genre tags.

In summary, The Work is not only a fulfilling conclusion to the band’s four album seasonal concept, but one that can stand on its own as a striking piece of music.  After the justifiable buzz placed at the band’s footsteps last time around, it takes some real courage to not simply continue along the same pathway, but instead blaze ahead in a new and even more daring one.  For those The Work really connects with, Rivers of Nihil have crafted an experience that will be treasured and looked upon as proof of what a band can do that has absolutely no limitations placed upon them.  A trip that is worthy of some deep exploration and time – there’s nothing quite like The Work.