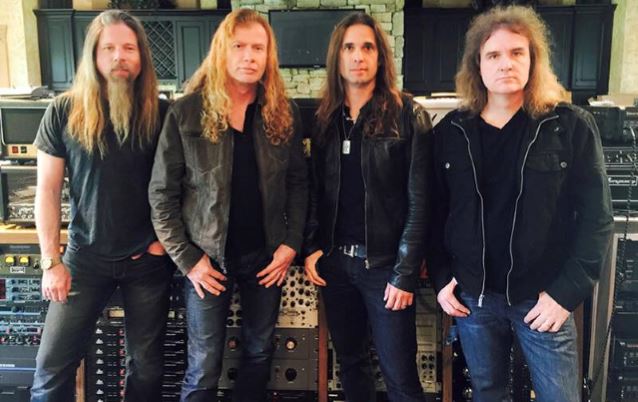 MEGADETH has entered Lattitude Studio South in Leiper’s Fork, Tennessee to begin recording its new CD and the group wants to bring its fans along for the ride.

For the first time, MEGADETH is going to bring you into the studio to be a part of the recording process, and give you a window into the world of Mustaine, Loureiro, Ellefson and Adler.

Some of the exclusive items available when you pledge via PledgeMusic are a pre-order the album digitally, on CD or vinyl, a signed copy of Dave Mustaine’s book, a signed copy of David Ellefson’s book, a two-hour guitar lesson with Dave Mustaine, a day in the studio with MEGADETH, signed guitars, Chris Adler’s drum kit, a disposable camera with one-of-a-kind photos from the studio, a jam session with the band and much more.

Mustaine’s message to MEGADETH fans about the campaign: “We’ve always wanted you to be ‘a part of’ and not ‘apart from’ us in the studio. Now, with PledgeMusic, you can be here with me and the guys and watch history being made with our fifteenth record. Check back often… you don’t want to miss anything!”