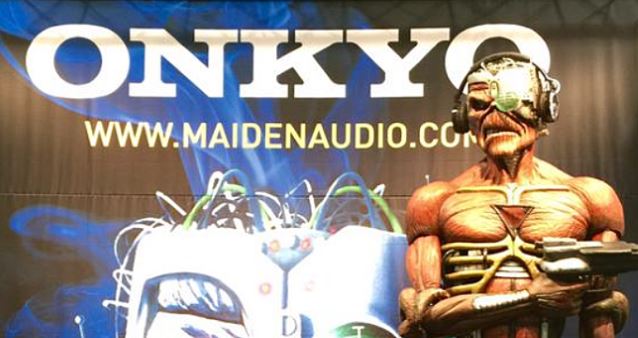 Although the first product from Maiden Audio will reportedly be headphones, a representative for Onkyo has said that this “will be anything but a re-badging exercise. As part of the Maiden Audio launch campaign, which is to be kicked off at CES — the annual technology trade show currently underway in Las Vegas — the project has its own online photo tweet wall, which you can see rolling in real time at MaidenAudio.com.

Visitors to the stand are invited to take pictures of a giant statue of MAIDEN’s official mascot, Eddie, either alone or of themselves posing with the statue, and tweet it using the hashtag “#MaidenAudio”. Instagrams and tweets posted will make up part of the scrolling wall.

Eddie is pictured above wearing a pair of IRON MAIDEN headphones at CES.

IRON MAIDEN is believed to be putting the finishing touches on its new studio album with longtime producer Kevin Shirley for a 2015 release.