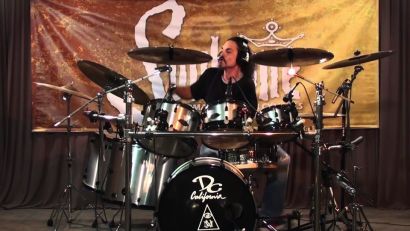 Former MEGADETH drummer Nick Menza has launchedATOMIC DISINTEGRATOR and is set to debut audio samples on October 22nd from 8:00pm -10:00pm PST. The program will Broadcast live from Menza’s Disintegrator Studios along with DJs Stack The Ripper and Steven Steel for the October 22nd edition of Metalocity onKosher Metal.

Menza will co-host the show and give away one limited edition autographed saw blade poster and will be taking calls live on-air. Listeners can tune in live free 24/7 via web, mobile, and other internet-ready devices.

According to a post via Menza’s Facebook page, he is currently in his Disintegrator studios based out of Studio City, CA blasting out some ideas with two unknown guitarist.

Menza: “It’s pumped balls out heavy, catchy and heavily influenced by GOJIRA, OPETH and MESHUGGAH. I will be holding auditions for frontman, bass player and guitar players in the coming weeks.”