Dave Mustaine Releases His Own Brand Of Wine 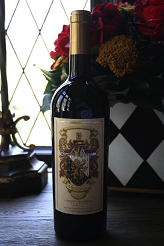 Limited quantities are vailable for UScustomers only. Limit of 3 bottles per customer. Orders will ship at end of April.

Mustaine will be a featured soloist with the San Diego Symphony on April 12th. The classical special concert, billed as Symphony Interrupted, will take place at Copley Symphony Hall in San Diego, California.