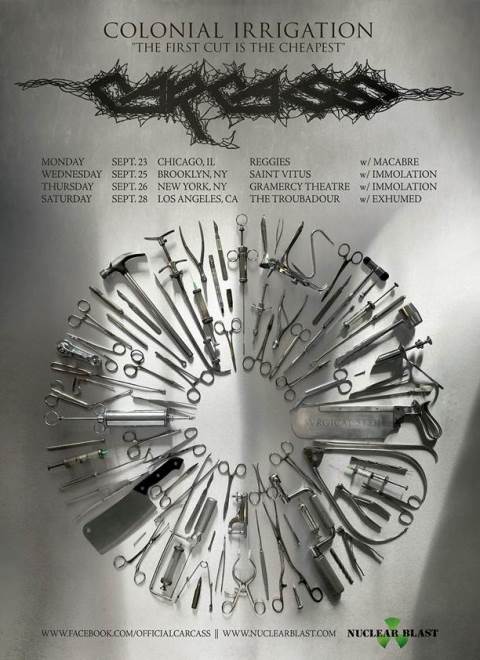 “Well, we thought we’d play a few small key shows, kinda like the vibe we had in London earlier this year,” commented CARCASS bassist/vocalist Jeff Walker. “Maybe we’re being a bit optimistic thinking we can fill these venues. Well, to make sure we do, we’re bringing along some old friends and bands who will probably blow us away.

“We’re too much of a bunch of tight wads to throw a record release party, so this is the closest you’ll get.

“Come on down, and bring your receipt with the new album purchase and demand a refund!”

Surgical Steel will be released on September 16 in the U.K., September 13 in the rest of Europe and September 17 in North America via Nuclear Blast Records. The effort was produced by Colin Richardson (FEAR FACTORY, MACHINE HEAD, NAPALM DEATH, SLIPKNOT, BULLET FOR MY VALENTINE) and mixed by Andy Sneap (MEGADETH, ACCEPT, EXODUS, ARCH ENEMY).