Spanish thrashers ANGELUS APATRIDA have released the video for “Serpents on Parade,” a song from their 2015 album Hidden Evolution. 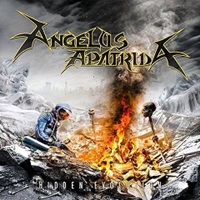