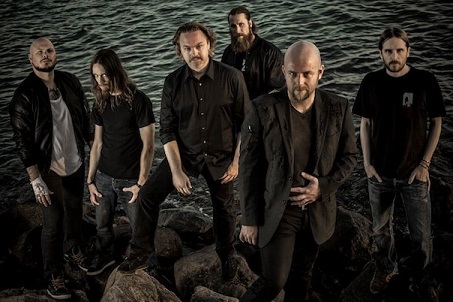 Dead Rhetoric: Before we get to the new album, let’s talk about Peter’s departure. There wasn’t quite the same buzz as the first time he left, so was it a matter of both parties agreeing to part?

Bjorn Speed Strid: It was pretty interesting because we noticed in the studio, everything was fine recording The Panic Broadcast; he was really excited for that. But as soon as we started to do the tour for the album, we could sense that “Oh, here we go again. He’s starting to feel stressed.” [It] was economically as well. He has to provide for his family and it impacted the band in a pretty negative way. We felt it coming; we weren’t surprised whatsoever. At least now we know. It doesn’t work out like that…that it’s not going to work touring again, the same reason, right? Therefore, it was pretty weird it all came out, out in the open. His statement was saying that it was because of “creative differences,” which wasn’t true whatsoever. We really don’t know why he decided to put that…maybe he felt bad. Maybe he didn’t want to put he didn’t like being away from his family, which was the reason the first time. He felt bad toward the fans to put that statement out, but it’s a very valid reason, it’s very understandable. That’s why we got a little disappointed. He put it out without asking the band; it came out of nowhere. We knew it was coming, but it was weird how it came out.

Dead Rhetoric: I remember talking to him in 2009 right after he rejoined and even then, you could sense that he wasn’t totally onboard with the grind of touring.

Strid: Yeah. That’s what we thought as well. We didn’t really talk things through; it was like one day, “Let’s try this thing out again.” We were really stoked about that, but it didn’t work out and maybe he shouldn’t have come back. But like I said – now know, and maybe he’s in a better place. Now  have David Anderson, who’s really passionate about everything.

Dead Rhetoric: The core of the band is really strong – you, Ola, Dirk, and Sven – which is why you were able to absorb a loss like Peter again.

Strid: I think we’re definitely showing it with the new album. It’s showcasing everyone’s ability to write songs because everyone was involved with writing the new album. Everybody has contributed with songs and lyrics and I think that’s a statement in that sense. Peter was definitely a big part of Soilwork, but he’s not irreplaceable. It definitely takes a special person and we found that person in David Anderson. We’ve known him since 2006 and we’ve had him on tour a few times before and he’s a huge fan of our sound. We know him really well on a personal level and musically, too. I don’t think he needed to adjust in any way to write Soilwork songs.

Dead Rhetoric: The double-album was your idea, so what was the reaction amongst the band? Was it, “Bjorn, you’re crazy?” Or, was everyone into it?

Strid: They didn’t think I was crazy, but they were surprised [laughs]. I do come up with some weird ideas here and there. They did like this idea, but they were a bit skeptical and concerned with coming up with enough songs. Also, not having been in the scenario where there was comprise, like the first disc being awesome, then the second going downhill. It doesn’t make sense to write a double-album just because, but when we began writing, we started getting a sense that we have something good going and it was going to be diverse, and each member was involved. If you’re going to make a double-album, it needs to be diverse. You can’t make two Figure Number Fives.

Dead Rhetoric: There’s trademark Soilwork songs like “Spectrum of Eternity,” “Tongue” is one, and “Realm of the Wasted.” Then there’s the songs in which you tried new things like “The Windswept Mercy,” so I’m with you – there is a balance.

Strid: I noticed pretty soon that it would work. What was different for this album is that I picked up the guitar – I wrote eight of the songs on the album. I contributed with riffs before, all the way to Steelbath Suicide, but I never made a complete song. If I ever did, it ended up in the trash [laughs]. I just felt that I had so much inspiration that I wanted to prove to myself that I could do this; I wanted to build songs from the fucking scratch. I saw it as a challenge and it really worked out, and one of the songs I wrote was “Spectrum.”

Dead Rhetoric: So that’s all you? Some of those riffs are pretty quick, you know.

Strid: I can’t really play them that good. I didn’t record them in the studio [laughs]. I wrote it back home, then I took it to David, who added the melody in the chorus, so I won’t take credit for the entire song [laughs]. That’s what I did…I had an idea and I recorded it, and I pieced it together. I took it David and told him what I wanted to do, and he saw it right away. That’s exactly what you want in a band…you have that mutual understanding.

Dead Rhetoric: It’s looking like it could be one of your better openers, going all the way back to “Follow the Hollow.”

Strid: I don’t know if you’re familiar with Spotify, but it’s among our top songs. The album isn’t even out; it’s just a single, so it’s pretty cool to hear that.