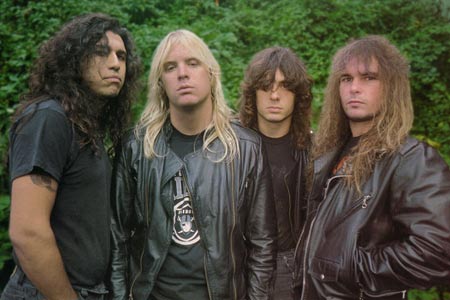 Author D.X. Ferris was kind enough to lend DR an exclusive excerpt from his recently-released (and quite enthralling) book, Slayer 66 2/3: The Jeff & Dave Years. The book, available on Amazon in multiple formats, can be considered one of the few all-encompassing biographies on the band, detailing the Slayer’s gradual rise through the thrash ranks, to the tumultuous year that was 2013. Ferris hits upon it all, but for now, here’s an excerpt detailing the infamous “Cushion Riot” concert from 1988, where the band’s fans ransacked The Felt Forum in New York City. Read on…

The Cushion Riot Concert
In 2013, South of Heaven entered the Decibel magazine Hall of Fame, making Slayer the first group to have a second album enshrined. Looking back, Chris Dick wrote, “…the violent bashing and wanton destruction of yesteryear had advanced into cunning hooks, lurid thematics and wicked songcraft…. Eerily perfect, South of Heaven was Slayer sophisticated, yet remarkably visceral.”

Speaking to Decibel for that commemorative oral history of the record, Hanneman recalled, “I just remember after putting out Reign in Blood, we didn’t want to try to beat that album. It’d be kind of ridiculous, ‘cause that album’s so fast. So we all talked about it: slowing the record down a bit to freak everybody out.”

Fans accepted the record. Then they freaked out.

The summer of ’88 ended with two legendary concerts. People who attended the band’s New York City show describe it as a riot. It wasn’t quite one, and it certainly didn’t compare to the property damage and unrest the took place outside the Hollywood Palladium. But it’s easy to understand why they recall it as a riot.

The theater had a sprawling, general-admission floor area, with surrounding seating sections. The seats made it a memorable show for the ages.

Before the concert, radio ads featured a deep, exciting, monster-truck-event voice, who promised, “SLAYER… YOU CAN ALREADY FEEL THE GROUND SHAKING!… This is no namby-pamby rock and roll — this is SLAYER!”

The announcer was not exaggerating by much.

Going into the show, venue management expect a madhouse. They marshal a security force that could have quelled a conventional riot. But in the presence of Slayer, a distinct form of mass madness manifested.

An anonymous account from the time claims NYC police stood shoulder-to-shoulder between the barricade and the stage before the show. But on a video of the concert, no police are visible. Eyewitnesses who were there don’t recall that kind of police presence, just regular Garden bouncers.

“It was ’88,” remembers Howie Abrams, co-author of The Merciless Book of Metal Lists and former A&R rep for Warner Bros. and Roadrunner. “So as far as the ‘bigger’ venues go, the type of crowd reaction Slayer got must have freaked them out. They were clearly not ready for it, and this particular crowd was above and beyond!”

Fans decided they couldn’t wait for headlining band to start, and they started the action early.

“The barricade collapsed multiple times, including before Slayer even came on,” recalled Abrams. “And verbal attempts to get the crowd to cooperate with its repair fell on angry, deaf ears.”

Farther back, one fan ripped open his seat, tore open the foam cushion, and whizzed it across the crowd like a massive Frisbee. The idea went viral, and the air filled with white foam squares, like seagulls zooming over a beach. Other fans hurled gutted folding chairs.

“Eventually, Slayer came out and told us that if we didn’t mellow out, they wouldn’t be allowed to play,” notes the show review. “After a while, they came out and played one of the best shows (outside of a L’Amour show) I’ve ever seen. The pit was so fierce that night that everyone who was in it left bleeding and battered.”

On this point, the review and the eyewitness agree.

“There was a sense of violence in the air from the minute I arrived at this show,” says Abrams. “It seemed as if half the crowd was on angel dust and just didn’t give a fuck about their own safety, much less anyone else’s. To this day, I don’t recall seeing as many bloodied, passed-out and fucked-up kids in one building as I saw at this infamous show.”

Captured on a bootleg video, the concert is an unforgettable spectacle.

Araya stays rooted, front and center, for the whole set. At either side of the stage, King and Hanneman headbang in place. Periodically, the guitarists casually stroll across the stage, switching places.

With a constant cluster of lights on Lombardo’s riser, the wafting special-effects smoke is a permanent cloud around the drummer, who looks like he’s playing atop a volcano.