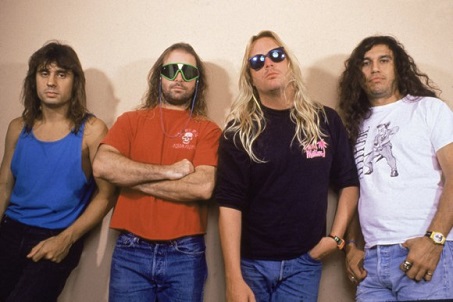 And the crowd is a crater full of bubbling lava. By the third song, the pounding “Silent Scream,” the pit is spitting a constant flow of bodies onto the stage.

At the song’s climax, Araya screams, “Death / Is / Fucking you insane!” To his left, a shirtless longhair wearing fingerless gloves and leather vest leaps from the stage, onto the crowd. It’s so dense, he doesn’t go anywhere. He just crawls backward onto the stage, mashing heads and grinding his knees on surprised fans’ shoulders. When he reaches the stage, he jumps again. And this time, he swims away, torso buoyed by a tide of raised arms.

Deeper in the floor, four or five mosh pits break out in the convulsing mass of bodies.

At least half a dozen bouncers are stationed across the stage, clustered at strategic points. They’ll hardly get a moment’s rest through the show. And this point, they could have used another dozen.

“We’ve got to straighten some of the shit that’s down here in the front,” Araya says, gesturing to the rapidly disappearing space between the stage and the crowd. The frazzled bouncers shuffle some hardware around, and the crush continues.

Slayer kick into the slower “At Dawn the Sleep,” Hanneman and King both stage right, headbanging in unison, at either side of a giant, bedazzled, inverted crucifix mounted on the Marshall wall. The crowd has subsided for now, but it doesn’t last. By the time the song reaches a crescendo and Araya chants, “Kill/Kill/KILL!” the crowd-stage overflow has resumed.

“You guys have to be one of the fuckin’ wildest bunches we’ve played for yet, man!” the singer barks after the song. “I take it there’s no taming the New York hardcore influence!”

In about 75 minutes, Slayer plow through 17 songs, playing at their tightest:

Even on the bootleg, the performance and sound quality are more impressive than anything from the band’s official live album, 1991’s double-LP Decade of Aggression.

By the set’s penultimate song, “Chemical Warfare,” the entire floor area is a churning pit. The main set concludes with “Ghosts of War.”

For two tense minutes, the crowd surfing dies down. But deeper in the hall, the frenzy escalates.

“I began to see packs of kids with knives and other sharp objects running toward the back of the venue, where there were several rows of seats,” says Abrams.

The cushions keep coming. Once again, the air fills with whizzing white-foam squares.

Rather than milk the tension for an inevitable encore, Araya takes the stage and pleads with the crowd to settle down.

“Listen, man,” he says, chuckling. Under inadvertent assault by loyal fans, he issues some directions to the light crew: “Can we drop the spots, cuz I can’t see shit flying at me?!”

Alone in front of the pulsing crowd, the frontman continues: “Listen! I’ve been asked to inform you guys: Stop throwing these fuckin’ cushions around! You guys came here to have a good time, and you’re fuckin’ blowin’ it, bigtime, man!

“Listen, this isn’t me talking,” he continues. “This is common sense here, dudes! Fuckin’ A, come on! I know you’re here to have a good time — you’re having a good time. But fuck, man, why don’t you give us a break? Do me a favor? Leave the fuckin’ spots off. I can’t see shit flying! We can probably never play here again because of all this shit!”

And, after a killer “Angel of Death,” they never did play there again. Not that century. When they returned to New York in October, they were back in L’Amour, for a two-night stand.

Araya plays the final song with a bouncer stationed on his left, who spends the tune trying to catch or deflect flying foam. The studio version of the song runs 4:51, but the band finish it in 4:36 tonight, about 5% faster.

Slayer 66 2/3: The Jeff & Dave Years can be purchased at this location.