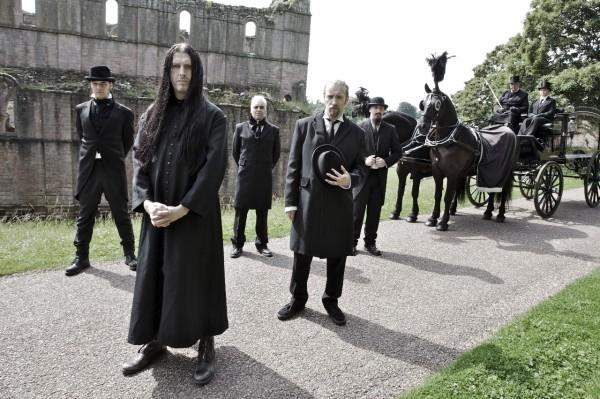 The metal world is a better place when Paradise Lost is a part of it. Granted, such statements would ascribe the Brits as having something akin to Demigod status, but who can argue with untouchable albums like Gothic, Icon, and Draconian Times? Their late 90’s/early 00’s electronic rock forays might have put a dent into their structure, making their return to more metal-oriented fields all the more invigorating, with their latest, Faith Unites Us…Death Unites Us being the heaviest PL album in years.

As vocalist Nick Holmes would tell Blistering, the band is put in the unfavorable position of having to live up to their past output, a quandary that came to the fore when 1997’s experimental One Second hit the shelves. Hair was cut and the metal was toned down, setting the stage for a four-album run that distanced the band from its Gothic metal roots. The electronic sheen and commercial aesthetic of that period carried the band into the middle part of this decade, with 2005’s self-titled gem seeing the band return to its traditional Euro metal wranglings. Since then, Paradise Lost have only gotten heavier and more gristled, a trait that emanated on 2007’s In Requiem and the source of our conversation with Holmes, Faith Unites Us, Death Unites Us.

Holmes probably didn’t know what he was getting into when he phoned this scribe, who has spent the better part of the decade pouring over the band’s catalog. We threw a lot at the affable frontman, even stumping him on a few of the band’s more-unheralded songs. All was forgiven (and jolly), though, as Holmes proved to be one sharp Englishman…

Blistering.com: Back in the late 90’s, did you imagine you would return to doing full-on metal?

Nick Holmes: No and we never thought ahead six months at a time. We never had any five-year plan; it’s impossible, especially now. It just felt right at the time and I don’t think you can do anything else without your heart in it, you know?

Blistering.com: Were you burnt you on doing straight-metal? One Second is where you entered your “experimental” phase.

Holmes: I think did we an enormous amount of touring for the Draconian Times album and we were just burnt out on all of it. In hindsight, it might have been easier to take two or three years off then come back, but we went into another room for a couple of years [laughs].

Blistering.com: Plus, who can forget the reaction when you got your hair cut.

Holmes: [laughs] I think if the Internet were around back then, we would have been hit a lot harder. Maybe it’s better the Internet wasn’t around [laughs]. It wasn’t an overnight thing – it gradually happened. It’s not like we woke up one day and decided to become a rockabilly band. It was very gradual, again, we just wanted to try different things. We never stopped liking metal music, we just wanted to explore different avenues. In hindsight, it would have been easier to do it [1999’s] Host as a project. However, I’d say the Host album is easily one of the top three albums we’ve ever written. It’s not like I’m going to push it to the carpet.

Blistering.com: And that’s when your focus went away from North America.

Holmes: Our focus went away after 1993 when we did the Morbid Angel tour. A lot of it was because we were young guys who hadn’t been away from home that much. It was a bit of a shock for us. Now, I love North America. I want to go over much of the time. We just didn’t have that much fun on that tour, so it wasn’t worth it to us. I regret it a little bit, yes. If I regret anything, it’s not spending more time in the States.

Blistering.com: As for the new album, when you sat down with Gregor [Mackintosh, lead guitars], was the onus on writing some heavy stuff alaShades of God or Gothic?

Holmes: Yeah, sure. We wanted to make it as heavy as we could make it, but also encompass the things we did in previous years. We didn’t want to turn our back on the songwriting style we chose over the last few years or make it to where I was going to [just] sing more now. We wanted to encompass the best aspects of everything we’ve done. Sometimes people think we’re trying to dig up what we did on our old albums, but I haven’t listened to those albums in years.

Blistering.com: Some of your vocals are reminiscent of your older stuff, so was it just a matter of striking that balance between singing and growling?

Holmes: Some of its just growling in key, though. I can’t do the “death metal” voice…I’m not into doing that and I’m not willing to listen to it either. I prefer more “metal” singing than death metal singing. If the riffs are aggressive, then the vocals should be aggressive. I kind of hate it when there’s a heavy riff and there’s this weak voice over to top of it.

Blistering.com: The album title [Faith Divides Us, Death Unites Us] says it all, what was the overall theme for the album?

Holmes: The lyrics were there before the title came out. It was never meant to be that specific. It’s just a catchy title and that’s what appealed to me. I didn’t start analyzing exactly what it meant until people started asking me about it. Basically, I got nothing against personal religion or personal belief, and if you have something in your life that makes you a better person or makes feel like you’re going to go somewhere nice when you die, I’m cool with that. I’m just against the exploitation that comes from organized religion. I don’t get it…they keep enticing people to believe something that’s not there and doesn’t exist, you know? Anything to do with organized religion – nothing good comes of it.

Blistering.com: So has your perspective changed from “True Belief” back in 1993 [off Icon] to today?

Holmes: It’s not very different at all. I’m very belief-less…back then I might have believed in ghosts or something when you die, but now, I don’t believe in anything.

Blistering.com: The video for the title has thrown some people off. How does it relate to the lyrics?

Holmes: There’s one person in the individual in the video and we didn’t want to do a performance video. I think the fact the video is good because of her acting. If her acting was crap, the video wouldn’t have an impact. It’s kind of disturbing, actually. I gave the lyrics to the video director and left it up to him. From what I gather, if you lose your hair, it’s the only thing you got…