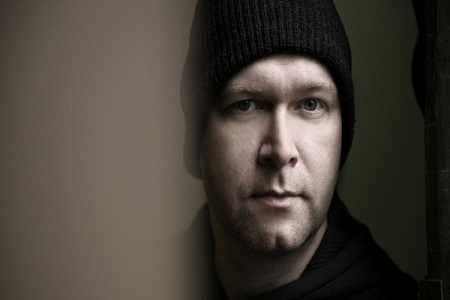 A picture of Elvis serves as Michael Kiske’s Skype profile photo, a shame for DR considering we wanted to compare our respective bald domes via the power of an internet cam. Lack of baldness look-sees aside, the affable singer was in a spry mood, amped up (or should we say “revved up”) to play a Formula One racing game on his computer once our chat concluded (“I love how you can customize everything so it’s up to date”).  Kiske, though, had to wait a good hour to start gameplay, for there was a lot on the agenda, particularly his new Place Vendome album, Thunder in the Distance, Unisonic, and some little band called Helloween. And once the two of us Chatty Cathy’s got going…look out.

We’re not going to re-tell the Helloween saga verbatim, for it’s regular internet fodder. However, the story of Kiske’s gradual re-entrance into metal is one worth delving into, the decade-long process of self-discovery and coming to grips with the wretched early 90s. Therefore, we’ll let the ultra-friendly German do the talking, and as you’ll read below, he’s cheery, talkative, reflective, and contemplative…the sort of things that make it incredibly easy to converse with someone. And once our interview wrapped, it was agreed upon by both parties that this wasn’t as much of an interview as it was a good conversation. Here’s the first part:

Dead Rhetoric: The last year and-a-half – if we want to go back into 2012 – would you say this has been your most productive period as a solo artist?

Michael Kiske: I think last year was mainly a touring year. Yes, we released the [Unisonic] record and I did the vocals in January, but that year for me, stands for touring.

Dead Rhetoric: For a while, you didn’t even like touring.

Dead Rhetoric: What changed your tune?

Kiske: It didn’t change directly because of touring; it changed to be interested in being in a band again. That was the first step. I got tired. I was going through several phases, mainly in the 90s and parts of the 2000s…very different to hating it all completely, to liking it a little bit more, to trying to make my own bands, but it didn’t work like that. When Kosta [Zafiriou] and Dennis [Ward] met up with me in Hamburg…Kosta approached me as a manager. He plays the drums, but he’d say his main function is management; it’s what he cares most for. He said, “You have not been managed properly in the last couple of years, Michael. And we would like to take care of that.” He was right – I’m ridiculous when it comes to that.

If I wouldn’t get offers, I wouldn’t do anything. That’s just the way I am. I love making music, but when it comes to the business side and planning a career…that’s just not me. Even record deals that I had – believe it or not – the companies were coming to me; they were sending me emails offering me record deals. I was never walking around trying to get a deal, which is lucky, but I probably wouldn’t have one, so when Kosta and Dennis approached me, it was the right time. It was full-circle. I got tired of the situation, I got tired of being on my own, and I thought it was a great idea and it has only done me good so far.

Dead Rhetoric: You tried to launch a band a few years ago with Supared.

Kiske: I did try to launch that, but if anything else, it was just another solo record that had a different name. The thing is, a band doesn’t work like that. It’s not like you put five people in a room and you call it a band – it has to do with the chemistry. You have to have at least one or two people in the band that have a strong creative output that you could work with. Even in that band, nothing like that happened. I had all the ideas and I told people what to do. I gave up on that because it wasn’t working.

Dead Rhetoric: If people don’t see your name – Michael Kiske – they will overlook it, don’t you think?

Kiske: Yeah, and it always takes time. Unisonic, I’m so happy at the moment because there’s so many great songs coming out. I’m not just saying that because I’m talking to you. [laughs] I’m not a man in constant promotion-mode, but I’m so sick of how certain musicians talk in every interview and it just smells of promotion. But I’m really excited about the material. I wasn’t so sure – we took forever with the first one, and it wasn’t until Kai [Hansen] came into the band that we had the final material to make the first record. I was a bit worried about this one, and it wasn’t until I met up with my best friend, who has helped me with a couple of records. I wrote three songs with him together for Unisonic that turned out very nice, but I was under so much pressure because I thought I had to do more. Kai is so busy with Gamma Ray, so who knows when he will come up with songs, but suddenly Dennis comes up with one great song after the next. It’s amazing. I wasn’t expecting this. He had sent me at least eight or nine tracks – great vocal lines and melodies – it really excites me.