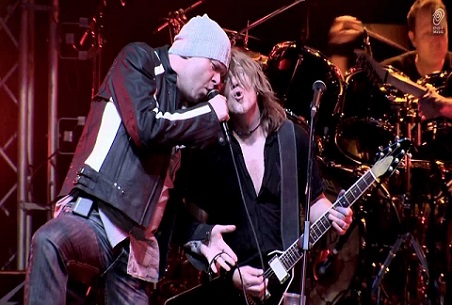 Dead Rhetoric: Will there be more of a metal approach with the second album? The debut had its heavy moments, but you can’t call it a straight metal album.

Kiske: I don’t see Unisonic as a plain “metal” band. We like to see us as a rock band – which is a bit of a wider term. I don’t know how you define metal – everyone sees it different depending on the tastes they have. I said this to another interviewer – some of those guys who like the really evil crap, they call the heaviest Helloween records pop music. [laughs] Someone who is into Boy George, he calls Bon Jovi metal. It really has to do with what your understanding of metal is. I have a definition of what metal could be, but it’s very vague. It probably has to do with ways of guitar playing…

Dead Rhetoric: I talked to Mille [Petrozza] from Kreator about something similar and he felt the same way. He felt that some of the real metal stuff has been ruined because of the hair bands like Dokken, Poison, and Ratt. I get your point.

Kiske: That’s right. It is…even when you listen to some of the classic records of Judas Priest like Hellbent for Leather or British Steel or even Screaming for Vengeance, that, nowadays, if you listen to them, they’re rock ‘n’ roll. They invented metal. Back in those days, they were METAL. Judas Priest is the band that defines almost everything with metal, followed by Iron Maiden, of course.

Dead Rhetoric: I’m surprised to hear you reference Priest in such a manner because it’s always been known you’re not a big metal guy.

Kiske: I always did that. I was really into metal when I was teenager, when I was five years-old. Sorry! Fifteen! [laughs] I was 15 when a friend of mine played me some stuff and “Run to the Hills” was on the charts in England. My main bands during those years were Judas Priest, Iron Maiden, Metallica, then later on, Queensryche, Black Sabbath with Ronnie Dio, but those were the most important to me. I loved the first couple of Accept records. When I was still in school, I was listening to Restless and Wild, and Breaker – those two I really loved. But at the same time, I started with Elvis, I always loved the Beatles. I never had this one-track-mind when it came to music. One day I could be listening to Metallica, then the next, the new U2 record, or Kate Bush, even Simon and Garfunkel. I don’t care; whatever gets a kick out of me. Music doesn’t need to be loud to reach me.

Dead Rhetoric: As for Place Vendome, you’re a songwriter at heart, but do you prefer when other people write for you?

Kiske: It’s easier. When you talk to the lazy me, yes. [laughs] It’s so much easier because I only have to do the joy part, which is singing. With Dennis and I, since we’re in Unisonic, we spare our songs a little bit. With the first Place Vendome record, Dennis wrote a bunch, if not the whole thing. The second record and this one, we didn’t write a song – it was all other songwriters. We only choose. We get the demo versions of the songs and say “That sounds nice!” or “Uh…” but most of the time we agree with the stuff Serafino [Perugino, Frontiers Records head] is sending – he would never send crap to us. That’s the only part when it comes to having any input to the songs. Then Dennis will make changes to the arrangements – most of the time he’s making the songs shorter that are over-packed with parts. They’re too long.

Dead Rhetoric: Have you ever been interested in the production side of things?

Kiske: Yeah! I mixed all of my solo records, but I got tired of it. That’s why I tell you it’s really painful. It took forever…and I can’t stand listening to the same song 20 times every day just to get balances right and stuff. I don’t know…if you do it like Dennis does with this routine, it might not be not as painful, but I remember it being a pain in the ass.

Dead Rhetoric: So were you ever that guy that hung around in the studio for a while? Or sat behind the producer’s chair giving suggestions?

Kiske: When I was younger, yeah. When you’re young, you think you know better anyway. You’re scared someone might do something you love in a way you don’t like as much. I was a teenager when we did the Keeper records. I wasn’t really bad – I wasn’t trying to control things. I worried too much and I probably said too much, but [Keeper I producer] Tommy Hansen was not an idiot. He knew we were young guys and knew how to handle us. Nowadays, I love leaving responsibility to others.

Dead Rhetoric: Some singers would never do that.

Kiske: You gotta be happy with it, but c’mon, you have someone like Dennis Ward in the band. He knows what he’s doing. Honestly, when we started, the first record, I was still in that mode of doing everything by myself. Nowadays, I know he knows what he’s doing and I’ve learned a lot from him. I’ve said a couple of things on how I would like to have the vocals to sound, which was probably stupid to him, but I thought it would be better-sounding. I was using like an old Elvis electro-voice microphone. It’s a beautiful-sounding microphone, but not necessary for the studio. You can use it when this real old-fashioned sound, but it has un-clear highs.

Dead Rhetoric: AOR music: Do you feel this is the best style of music for your voice? Many still feel you’re at your best with constant double-bass drumming behind you.

Kiske: I don’t sing that much different when it comes to that, especially when it comes to vocal lines. There’s a lot of the heights and melody curves that are classical to what people know. The music is different; it’s not my favorite, which is more the direction Unisonic is going. To me, Place Vendome is a side-project I do because I know people love it. I wanted to stop it because of Unisonic – I thought I’d let a few of those things do, but there are so many requests when I was touring with Avantasia and Unisonic, so many questions about if another one is coming out. There’s an audience for it. To me, it’s too traditional. It’s fun to sing, it’s nice, but it’s too unoriginal. I like things a little more special, less radio. It’s started in a very good way, but I prefer Unisonic. That’s more my cup of tea.

Part II of our interview with Kiske will run Monday, December 16.