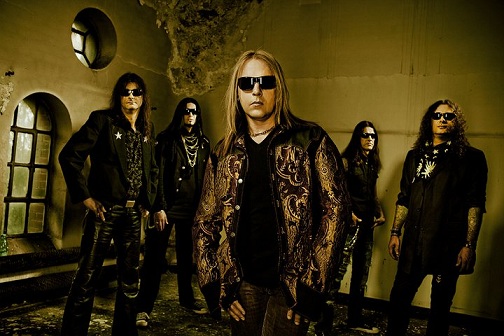 A continuation of Blistering’s previously-posted interview with Helloween guitarist Michael Weikath (click here to read it), the second part of our chat focused on the band’s troubled period during 2000’s The Dark Ride touring cycle, how he feels about his German metal contemporaries, along with how the German does a show without smoking. Want to find out? Read on…

Blistering.com: Back to the new album. It’s dark, but it’s not dark in a The Dark Rideway, per se.

Weikath: I was criticizing the riffing on The Dark Ride not because it was dark, but because it was so simple. When I was 13 or 14, I took my cheap guitar I had and put a distortion and naturally, I would try those low things. I tuned an octave lower [makes low guitar sound], and that was in ’76 when Sabbath was doing those things, and I wasn’t even aware of Black Sabbath. With the dark guitars, I wanted to take a modern approach to it with “Raise the Noise,” which exactly what that is. We can do that with guitars, or do you really want to have that damn flute in there [referring to the flute solo in the song], because it’s a matter concept. I have a great song, or can we fuck it up with a flute solo [laughs].

Blistering.com: Obviously, the atmosphere in the band is different with Sasha and Dani, so does that make you forget about how bad things were around The Dark Ride with Roland [Grapow, ex guitars] and Uli?

Weikath: It’s definitely a more secure lineup. Uli and Roland were guys that were doubting the overall concept of Helloween and the music that was made in Helloween, so they wanted to change so many things. The Dark Ride to me, that was too extreme of a change, just to cater to naysayers who we don’t really know. To me, it was a kick in the stomach, like “We don’t need your old, boring stuff, we’ll do something else.” Basically, that was the message that was delivered. So it was really hard being around my own band during that time, and I thought of leaving.

Blistering.com: How did you let all of that happen? I mean, you’re one of the founding members.

Weikath: There’s people that simply don’t care or listen. I don’t know what it is. You got the right guys around, you prefer not to listen to them or take no orders from them when they’re working. They tried to talk to people…they found fruitful ground on Deris because he wanted to do more modern stuff because if you look at some of the Pink Cream stuff, it was kind of dark. I was out on a limb back then, and I didn’t know what my position in the band would be. You know, it all has evened-out in a nice way. It took me some time to learn about this band and what it could be. Now we’re doing a conglomerate of all of those things, and I don’t mind it. It just took me a long time to accept it.

Blistering.com: That was an interesting way to follow up Better Than Raw, which by all accounts was your best album of that decade.

Weikath: We got numbers from Sanctuary Management that didn’t look good, so Uli and Roland started to complain. They had all of these views about what to do to please the masses and get back record sales. That’s how all of that stuff got out and originated. I was all surprised because I felt good; I was maybe going to do a solo record or something. When things like this, you wouldn’t do any of that. It became an instant nightmare. I wasn’t admitted at the studio, I didn’t feel I was wanted there and we were recording all of these strange things then. Nobody told me that “Hey man, that’s the way to go!” And there was [producer] Roy Z going, “Yeah!” And I was like, “Where am I?”

Blistering.com: You’ve always tried to keep Helloween positive, so do you wish you never listened to other people?

Weikath: Times have changed. We sell a fifth of what we sold with all of the major players, and so do they. Piracy, it’s not funny anymore. Because of that, we have modernized things, but Uli and Roland may have been right, but not by their own right, and not in that way. We have to be like that to cater to young people. We lost a lot of ground in Japan because they prefer the classic Helloween. Even in Japan, there’s people emerging who get used to that change. We had to undergo those music changes. I don’t know… it’s the times. We’re doing this, and this kind of music with low guitars and dark parts. We had this in the past with Kai Hansen, but Kai would take a more fresh approach and aggressive and not really evil. We had to acquire these new things or people would be saying, “Yeah, that’s the same Helloween doing the same, dumb power metal.”

Blistering.com: Do you pay attention to what Kai is doing or what Blind Guardian is up to?

Weikath: Blind Guardian, I don’t understand. I tried to get into it, and I failed. Gamma Ray is a cool thing. The last thing they did [To the Metal] was pretty good. You get to hear the influences they have or Kai has, and you have to smirk, but on the other hand, the songwriting, I thought it was a cool thing. It’s strange because they got a lot of bad reviews from the old fans because it wasn’t that successful. I could sit there and go, “Yeah, now they got it!” I like it more than other things they’ve done, like Somewhere Out In Space, which is one of the less-received Gamma Ray albums, but that stuff, I seem to like more than the fans. Me being a Hansen and Gamma Ray fan, if they dont like it, at least I get to like it.

Blistering.com: Do you ever have moments where you listen to stuff from Kai and think it could fit with Helloween?

Weikath: They strive to do their thing. There’s also those power metal bands who are doing their stuff, and Kamelot, and whatever bands there are trying to keep that music out there. Otherwise, it would be just new metal. There is a force of people you can’t put down, which is why we have Stratovarius or other bands. You can say, “Ok, they are copying Helloween and I should be angry.” But they’re bringing forward this, as opposed to other stuff that could be out there. As long as it works, I’m happy.

Blistering.com: On a totally non-related note, can you do a show without smoking a cigarette?

Weikath: I’ve had to, and I make mistakes [laughs]. Did you know that Lemmy of Motorhead has a contract that says smoking is part of the show? If you want to admit him with any kind of contract, it is in the contract he has to smoke onstage. I’d like to have one like that [laughs]. Sometimes I get mixed up because I have that nicotine addiction, and sometimes I make mistakes. I started smoking when I was 14 years old and I don’t want to promote it because it’s one of the dumbest things you can do. It’s like taking crack and trying to survive. I tried quitting in 1990 when I lived in New York, and I realized I would come up with strange stuff, like [the much-maligned]Chameleon, which wasn’t right for Helloween. So I decided to eat meat and start smoking again, which makes me more evil, so I could convey better Helloween material and do cheesy stuff.