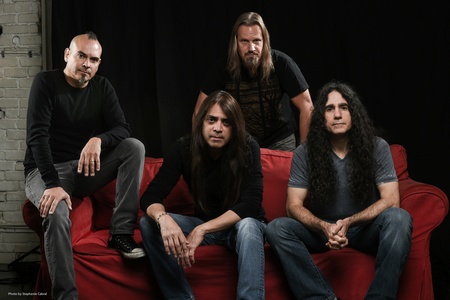 Adapt or die. A motto many older bands of the genre struggle with – especially as the music consumption model streamlines into digital platforms where proper compensation becomes the hot button topic at hand. As one of the premiere acts in progressive metal, Fates Warning stride along from their 1980’s beginnings to a current incarnation of veterans well equipped to deliver all the goods in the studio and on the stage – and accept that branding and marketing in today’s scene means you are only as good as your last record or latest concert.

Lucky for newcomers or long-timers, the latest studio record Theories of Flight gives listeners an adventurous product that takes us on atmospheric, bluesy, and majestic plains. Guitarist Jim Matheos handles the songwriting and axe duties brilliantly – Ray Alder reaching into his voice expertise and channeling a lot of inner emotional depth especially in lower and mid-range capacities. Add in the rhythm section finesse from bassist Joey Vera and drummer Bobby Jarzombek and you can understand why this will be a record slotting near the top of the FW discography, which hasn’t happened in decades to these ears.

Ringing up drummer Bobby Jarzombek on the phone, we covered his thoughts on the approach taken in Fates Warning for the new record, how he feels about the state of drumming today – as well as a lot of talk about his personal drumming history from Juggernaut to Riot, Halford to Sebastian Bach… and a little Spastic Ink too.

Dead Rhetoric: Theories of Flight is the 12th Fates Warning studio album, and second that you’ve recorded with the band. Where do you see your role as far as a drummer within this band- given the previous discography and standards set by Steve Zimmerman and Mark Zonder – and how do you feel the overall recording sessions went this time around?

Bobby Jarzombek: The thing is, I started with the band in 2007. We did a lot of European touring from that time until we recorded Darkness in a Different Light. Right before that though I did the Arch/Matheos record, so it was a good thing because I was able to really get a feel for the band for a few years. We would go to Europe twice a year for like 5 years, and so I was really able to get a good grasp of the material, the fanbase, and that whole thing. When we started working on the material and Jim said he wanted to work on this record, I didn’t really think about it so much. I didn’t have to analyze anything, worrying about playing the right thing, if I was playing too busy- I just did what I felt.

I’m taking things as they come to me, whether it’s the whole song or a little part of a song. With the stuff that Jim sends me, he gives me a rough drum program and I listen to that, take my experiences and my style of playing and work with whatever is presented in front of me.

Dead Rhetoric: Are you encouraged to expand upon certain ideas that Jim gives you musically – and how thorough of a guide/demo track do you get before you prepare your parts and go through recording?

Jarzombek: It’s weird. The way Jim programs stuff when he sends the stuff to me, it’s pretty wide. It’ll be maybe sort of a double bass pattern, which he adds as he has that in his program, because stylistically he knows I’m a different player so he leans a little more that way- it’ll have a double kick and snare, and sometimes he’ll throw in toms here and there, crashes or whatever. The parts aren’t formulated and they aren’t looped- sometimes when a guitar player sends me something, as a drummer, it will be looped over and over, and that gets really confining to a drummer. The guitar players are used to hearing these loops and they get attached to those things. That’s the worst thing you can do, especially if you are in a progressive band. Maybe in basic rock it’s okay, but for a band like this to work with a loop makes no sense at all. Jim does give me that freedom to be open. I can say what needs to be the focus, whether it’s a certain kick pattern or toms, the melodic part and how they run- it gives me that open area and it’s so much better working that way.

Dead Rhetoric: The last album you recorded your drums parts up at Carriage House Studios in Stamford, CT- did you do this as well for this album?

Jarzombek: No, I actually recorded the drum parts for Theories of Flight at my own studio here at home in San Antonio, Texas. That was cool as well that I didn’t have to fly out there, I was able to take my time and do the record on my own.

Dead Rhetoric: There appears to be this inner confidence brimming throughout the record – especially within the two epic songs “The Light and Shade of Things” and “The Ghosts of Home”. Any particular moments that stand out to your ears as exhilarating or surprising?

Jarzombek: That’s cool that you mention that, the confidence. I didn’t really think about that. I think there is that. Those are epic songs, it builds, it goes through the highs and lows musically, emotionally. We’ve all been doing this for a lot of years- Ray did an amazing job on these songs, conveying the message. I know both of those songs have different meanings- “The Ghosts of Home” has a personal meaning for Jim, and “The Light and Shade of Things” Ray wrote the lyrics to that, that has a personal thing to him. I like those type of songs- when we play live and go back into the catalog to do a song like “Still Remains”, that’s a song that has that where you feel the song as it goes through those highs and lows and it gets heavy and light, bombastic. There’s a reward when you play a song like that where it has a musical achievement or accomplishment and also a message at the same time.

Dead Rhetoric: I know you’ve played with some great musicians in your career, but how does it feel to play with another seasoned veteran on bass like Joey Vera in this band?

Dead Rhetoric: How would you describe the work ethic and songwriting philosophy that Jim Matheos employs on a musical basis – and what are your thoughts on the lyrical direction these songs took?

Jarzombek: Well, Jim is definitely focused when he gets into something. When he starts a project he goes hours and hours at it per day working on it. He has that focus, very few people have that focus. My brother has that focus, Jim also does. As far as the lyrical process I’m not really involved in that too much, so I can’t speak much about it other than the songs that I know. There is that beginning of things, starting something and finishing it all the way through musically. And that’s why all the Fates Warning albums are so great and different, Jim is there from day one until the last day to make sure that everything is as great as it can be.

Dead Rhetoric: You’ve been with Fates Warning since 2007 – do you think the extended break between studio albums from 2004’s X to 2013’s Darkness in a Different Light could have hurt the live market for the band, as many followers could have moved on to other bands and you have to regenerate listener interest?

Jarzombek: I don’t know if it hurt anything as far as the band itself- the music industry is changing. Whether you are out there playing every year, every month, every day or whatever- it’s always changing. One thing it did do was it kind of gave Jim more focus of where he wanted to go with the band in terms of writing. We spoke about it briefly before this record- mentioning when he was starting to write, like ‘what are you going to do?’ He said he didn’t know- he was just going to start writing. I think sometimes having that break can be kind of a good thing because it probably helped in the fact that we were able to come back three years later with another record versus waiting that long break. Personally for me it sometimes helps too, not having to sit behind a drum kit. If I’m sitting behind a drum kit every day when I’m home, which I don’t do anymore, I will do stuff around the house because it gives me a better appreciation and a better focus when I do sit down. It doesn’t seem like a job that I have to do.

Dead Rhetoric: Given your long history in the hard rock/ heavy metal business, what would you say are some of the standout moments either on record or stage that you really feel a special fondness for – where you were able to push things to another level?

Jarzombek: Me personally? Wow… well obviously being in the Halford band, that was a big moment. The fact that the Live Insurrection album with Halford was a key moment for me, a culmination of the Judas Priest classics that we were playing on that tour, and the Rock In Rio festival was the last date of that Resurrection tour- so it’s on a DVD documented. We were opening for Iron Maiden and it was only a 50-minute set, but it’s a quick but cool synopsis for what the band was about at that point. Thundersteel, the first Riot album I did was great also because it was my first major release. That was a high point. Spastic Ink, recording with my brother and having those records out there and all the time that we put into those records together. There are different points that I look back on, whether it’s an album or a live performance, those are all kind of cool things.