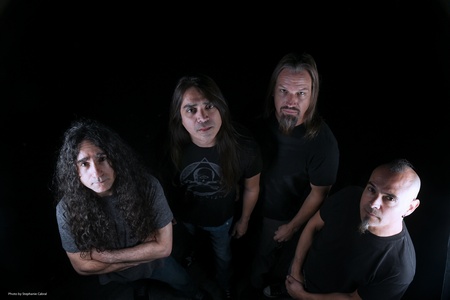 Dead Rhetoric: You probably get inundated with requests for tips and technical advice based on your skills as a drummer. Where do you see the state of drumming today in comparison to possibly your younger years – and how do you think people can stand out to gain their own style?

Jarzombek: Wow. That’s a hard question. I would say at times that heavy metal, when it focuses too much on speed or too much on those areas I think it just kind of sucks. It doesn’t move forward in terms of dynamics or syncopation or whatever. Something that is done just for the sake of speed, I don’t see the point in it. Lately there are a lot more people that are doing ghost notes in their playing, just speaking drumming-wise on a technical level. There are a lot of guys that are re-discovering ghost notes, which anybody who grew up in my era learning the Steve Gatz stuff, or any of those guys, a little more of a funk in their playing, or jazz in their playing – there’s a lot more ghost notes now on snares, hi-hat lifts. That stuff went away for a few years when speed was sort of the dominant aspect of heavy metal. Now it’s starting to come back and it is kind of cool to hear that again.

Those sort of things give the drumming a sort of wider sound, you know? It’s not so one-dimensional. A lot of times speed involves kicks and a snare drum. If there are more dynamics you have different dynamics with the ghost notes, you have a hi-hat, you can have it splash, you can have it tight, quick lift, and open lift. You can add linear patterns when nothing is hitting at the same time, where it’s creating a 16 note pulse, or syncopated pulse. There are a lot of cool things you can do with drumming that I do see that some guys are bringing back. Sometimes I don’t like to talk so much as a drumming geek because I’ve been playing for so many years, it feels a little weird for me. I do think it’s something that people need to hear- it’s cool to hear that things are coming back around to aspects that I grew up on, more dynamics in drumming.

Dead Rhetoric: How does Fates Warning handle the changing business model of touring being so much more important to maintain a career versus the days when album sales were the biggest revenue generator?

Jarzombek: You have to go out there and tour, sell merch. And then there’s the thing of whether or not we want to do a VIP package, that sort of thing. Those things all help, I know some people don’t completely understand that, but those are necessary things that a lot of people have done. You have to in a way to pay the bills, all this when it’s done tastefully is really cool. The last tour we did a VIP pack where we had a pair of drumsticks, some guitar picks, an 8 x 10 signed by the band, and the price was really inexpensive for that. We thought about the things that fans would really want to have. People that just want to support the band, they know that they want to see us on tour and come out with another record. Those are things that have changed from back in the early days.

Dead Rhetoric: Has your approach to life changed now that you are in your 50’s versus say your 20’s and 30’s? Do you find you need to take better care of yourself to perform at your best given the physicality of drumming?

Jarzombek: Well, I don’t really have to do anything different personally. I have always had a strong work ethic, and when I’m home I do a lot more work around the yard, the garden I have going. That keeps me healthy and keeps me rather than sitting around on a computer all day I’m outside being physically active. As far as the drumming, it hasn’t hurt my drumming that I don’t end up playing every day. Playing every day was cool when I was younger and practicing every day. I don’t feel the need or want to do that every day anymore because I’m focusing on other things. I know what it was like to want to do that every day when I was 20 years old, that’s all I wanted more than anything. As you get a little older, things shift. That’s kind of where I am at now.

Dead Rhetoric: You met your wife in 1985 while she was working at a record store – and you’ve been together for over 30 years. How important has it been to have a supportive family in your corner given your hectic schedule on the road with all the recording/touring you do?

Jarzombek: It’s definitely helped. Of course it’s not easy at times because of being on the road. It helps to stay grounded, it’s kind of weird- I was on a recent tour with Sebastian Bach for six weeks, we are out there and then the next day I’m out doing stuff around the house. It’s having that focus of knowing what you are going to do and what’s important to you, I think that’s the cool thing.

Dead Rhetoric: How does it feel to be a part of one of the pinnacle records in the power metal scene with Riot’s Thundersteel – any special highlights surrounding that time period?

Jarzombek: Yeah. It was weird because that record was my first major record. I had done records with Juggernaut before that, but that was great because I’m not on all the tracks- I’m on five of the nine tracks. I got the call to fly to New York and it was my first time ever on an airplane. We did a live showcase at Brooklyn L’Amours club, and it was weird because we were waiting for a response from the record label, the people that were involved. So we did the four songs that were already on Thundersteel and we did the classic Riot stuff. Nothing was happening, so we waited a few days and we didn’t know why we were waiting around, it seemed kind of stupid. The producer said he wanted to go back in the studio and finish this record, so we wrote the five other songs- “Flight of the Warrior”, “Johnny’s Back”, and a couple of others. We recorded those in a few days- “Thundersteel” had already been written. We recorded those songs in one day, I went home and waited for something to happen. I flew home and a few months later we were signed to Sony.

When that came out, we felt like Sony didn’t have our back because we toured on that record. We didn’t have a lot of people at the shows, they didn’t know about the new record, more about the older stuff. It’s weird, you don’t realize sometimes that when a record like that comes out- it’s on Sony so it’s out all over the world, you start to play out in Europe and Japan and everyone has the record, then you realize the impact of it.

Dead Rhetoric: Did you enjoy your time in the 1990’s with Riot as well- as there were some great records there too, especially Sons of Society…

Jarzombek: That’s one of those things where I was out of the band for a little while, I came back and did Inishmore, and then Sons of Society – I think at that point had I not got the opportunity to join the Halford band, which happened right after that record, had I not done that I think Riot would have continued on that same path. I love Sons of Society, it’s a great record and I think it’s better than Inishmore. Getting back together we didn’t have it quite together for that record, but by the time Sons of Society got together, that was the better record.

Dead Rhetoric: What does the touring schedule look like for Fates Warning in support of this record – as I imagine you already have a busy schedule yourself planned out over the next year?

Jarzombek: We are working on some things, nothing that I can mention right now. But we are working on some tours for Europe and the USA. One thing that we were able to do on Darkness in a Different Light is we were able to go to Europe, pretty nice tour on that record and the USA as well. We did a second cycle on both those territories and play a couple of different songs in the set list. Hopefully we can get this record out there and keep releasing tracks and keep the buzz going where we can tour a couple of times. I would love to do another Spastic Ink record, but you get so busy doing other things. Maybe one day we will put it together again, we’ll just have to wait and see.