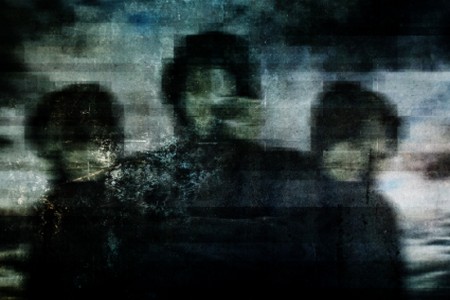 In metal, much of the time things are relegated to the familiar. Play it safe and you are chastised for it, but veer too far off course and you risk losing the metal tag. There are some variations for sure, but it’s rare to find a band that blazes it’s own path without the need to fall into a particular subgenre or sound and manage to sound unique doing so. Empire Auriga is one such band.

Patient and calculating, Empire Auriga is releasing their sophomore effort, Ascending the Solar Throne, this August after their 2006 debut, Auriga Dying. Taking the black metal aesthetic as a template, they’ve upped the ante on atmosphere and driven their sound into a futuristic and ambient approach. The result is a chilling and often depressive vibe that does well to distinguish itself from the genre’s peers. With their interesting approach, it seemed the best thing to do would be to go to the source to see how Empire Auriga plots their course for inter-stellar travel.

Dead Rhetoric: Your last album was released in 2006 (Auriga Dying). What’s the band been up to since then?

Empire Auriga: We’ve been slowly recording Ascending the Solar Throne since 2006, actually, and worked on it sporadically throughout the years. We finally put the finishing touches on it this year.

Dead Rhetoric: What is the meaning behind the band name Empire Auriga?

Empire Auriga: In part, it’s a tribute to Neptune Towers and its “Empire Algol”, and partly just a fictional setting to carry the theme of our distant apocalyptic future.

Dead Rhetoric: Going back to your first album, given the climate at that moment, do you feel the album was ahead of its time?

Empire Auriga: No. Combining black metal guitars and ambient has been done before, we were just interested in creating the atmosphere that fits our conceptual theme.

Dead Rhetoric: How does Ascending the Solar Throne compare to Auriga Dying?

Empire Auriga: Solarthrone is focused more on texture and the ambience goes deeper with a more melancholic mood. More cosmic; less of an industrial vibe. We wanted to stay true to the sound established on Auriga Dying while still finding ways to push the aesthetic forward into stranger spaces.

Dead Rhetoric: What are some of the lyrical themes of Ascending the Solar Throne?

Empire Auriga: In general, it’s about social, political and economic upheaval in a distant future where none of the beings in existence have yet determined a way to escape war and despair. It’s a sad vision of an all too realistic possibility of the future. Ascending the Solar Throne is another chapter in the same story.

Dead Rhetoric: What is the most important thing that you look at when you are songwriting?

Empire Auriga: It’s focused on layering simple melodies, creating atmosphere and adding texture to the overall whole to create a trance-like effect. We look for riffs that are evocative enough to sustain a track despite excessive repetition, and then layer and process from there.

Dead Rhetoric: Ascending the Solar Throne feels like an album that you sit back with and contemplate. What do you feel is the mood that best describes the album?

Empire Auriga: We hope the listener can at least become introspective about one’s own future.

Dead Rhetoric: What type of atmosphere do you look to create with your music?

Empire Auriga: The feeling we were hoping to capture on this album was more depressive (less visceral), but also more psychedelic; despair to the point of delirium. Even though most tracks only came together after being fed through DSP environments, the rawness of the source material was something we wanted to preserve. And so everything seems to be simultaneously crumbling and evaporating away.

Dead Rhetoric: With all of the “post-black” metal bands that have been emerging in the last few years, how far do you think the black metal tag can stretch before it doesn’t sound like black metal anymore?

Empire Auriga: Black metal as an aesthetic seems to be able to stretch quite a bit, although there is definitely a certain point past which a band becomes mostly shoegaze, jangle rock, etc. But this isn’t really a new question… Since the 90s, there have been pure folk/traditional albums described as, if not black metal exactly, at least having black metal appeal. Or something like MZ.412 blurring lines with power electronics and death industrial. In this spirit, we feel that it’s accurate to describe us as having a “blackened vibe” or black metal appeal, even though we’ve just essentially released a psychedelic, ambient doom album (and it doesn’t seem to fit neatly into any of those categories, either).

Empire Auriga: The thematic and emotional aspects of our sound will remain. The trance/repetition in the music will very likely carry over, but we will want to try to find new textural contrasts to exploit…. We’ve tried to explore the audio concept of collapsing inward and expanding outward at the same time on Ascending.., and there seems to be a lot more to develop there.