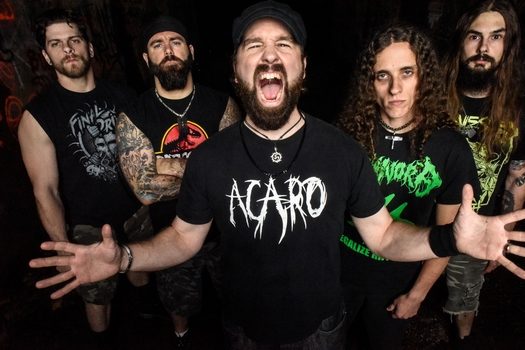 Things are never easy for bands that are just starting out. When it comes to metal, things are often never easy, even for the veterans. Such is the life of a niche market, where passion has to reign supreme above everything else. New Hampshire’s Death Rattle emerged with their first full-length in 2012 with Man’s Ruin, but it’s taken the last five years to finally craft a worthy follow-up with the recently released Volition (available for purchase HERE). It’s clear that the band’s passion kept them running in the years between releases.

Volition puts an emphasis on groove with the band’s sense of thrashy songwriting. It’s not so far removed from the NWOAHM movement at the early part of the 2000s, and they wisely focus on the more aggressive aspects of it instead of lacing songs with saccharine choruses. We fired off some questions to guitarist Ryan VanderWolk to find out what happened between releases, their thoughts on Volition, aggressive music, and the New England scene.

Dead Rhetoric: How do you think that the band has changed in the years between your 2012 debut, Man’s Ruin, and Volition?

Ryan VanderWolk: We have grown quite a bit. We feel that the songs are stronger, and we are more unified as different contributors to the same cause. Having Trey as our vocalist has really stepped us up to where we want to be, we feel his vocal sound is great and we are very happy with it. Additionally, the production quality is another step up from the Man’s Ruin album.

Dead Rhetoric: Were you concerned about the time between albums and losing some of the momentum from your first release?

VanderWolk: Absolutely. We faced a ton of adversity in this period, and at times we were spinning our wheels, and nothing seemed to go right. Not only did the writing process take a lot of time, so did the recording process. We actually scrapped an about 60% done album and restarted the recording process. We feel we are in good shape now to move forward and have solved all these issues.

Dead Rhetoric: In terms of the title itself, Volition, what do you feel that you have accomplished with this new album?

VanderWolk: We feel like we created a great metal album. We feel this album can hang with our biggest influences, with all due respect. Pretty much everything came together the way we wanted it to, although it took much longer than we wanted.

Dead Rhetoric: What do you feel defines the sound of Death Rattle circa 2017?

VanderWolk: Groove metal. Riffs, heavy grooves. Aggressive but palatable vocals for the most part. A focused metal sound. We don’t play around with a lot of things or experiment much, we just do what we do.

Dead Rhetoric: What can you speak to about the cover art for Volition?

VanderWolk: Our graphics guy at Recordtime designs came up with it entirely on his own. He is a great graphic artist. We love his artwork, and when I presented it to the band they all loved it so we went with it. The theme is somewhat similar to the theme of the Man’s Ruin album. Simple, powerful, deadly.

Dead Rhetoric: You recently released a video for “Love and War.” The days of MTV have come and gone, but do you feel that having a presence on YouTube is equally important for a band trying to break into a wider audience?

VanderWolk: We absolutely do. MTV may be dead and gone sadly, but people still love videos. I feel that when you watch a band’s video you get a better idea of who they are and you can visually connect with them. I feel that it is important.

Dead Rhetoric: In taking some influences from the New Wave of American Heavy Metal, who were some of your favorite acts when you look back?

VanderWolk: My favorite band of all time is Pantera and in writing the songs, that is my biggest influence. Chris’ idol is Chris Adler from Lamb of God. Jimmy is a mix of some death metal like Cattle Decapitation and Down, and C.O.C. Trey is a big Soilwork fan and for good reason, vocally they are incredible. Kevin is mainly inspired by Tool.

Dead Rhetoric: There’s a lot of venom on Volition. Do you feel that increasingly troubled times pave the way for more aggressive music?

VanderWolk: I absolutely do. “Love and War” is about that very topic. I think almost anyone can identify with the topics we express. Life is easy for almost nobody in this world, and for some reason humankind continue to create more difficulties and division making it even harder. Music helps with difficult times. Aggressive music for us is how we release it all.

Dead Rhetoric: What are some of the hurdles that you feel people tend not to think about when it comes to building up a band?

VanderWolk: Generally, people with an outsider’s perspective don’t understand what actually goes into it. I drove six hours round trip for over five years, once a week on average just for band practice. That what my passion pushed me to do. I felt it is what I want to do, and nothing makes us happier. A lot of people think guys just get together and everything just happens. It takes dedicating your entire life to it, and we wouldn’t have it any other way.

VanderWolk: New England is incredible. There are so many great bands from the area and it breeds great music and for hard work ethic. Some of our favorite bands are from our area, and some of the biggest bands in the world. It’s also nice to have many cities within reasonable reach when bands tour too.

Dead Rhetoric: What is most important for you when Death Rattle plays live?

VanderWolk: That we perform up to our standards and connect with the crowd. Our goal to have as much fun as possible while giving them a show and something to remember.

Dead Rhetoric: You are currently on tour with The Convalescence, Wings Denied, and Shaping the Legacy. What other plans does the band have for the remainder of the year?

VanderWolk: After this tour we plan to get going immediately on pre-production for the next album. We already have a lot good ideas to start with. We also plan to release some more music videos and content as well plan our next tour. 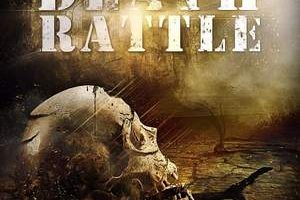