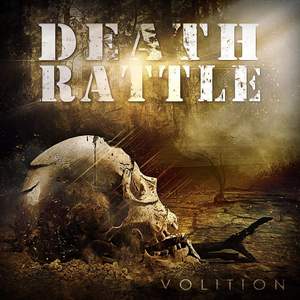 New Hampshire’s Death Rattle made their debut back in 2012 with Man’s Ruin. In attempt to avoid the sophomore slump, the band fine-tuned songs that would become the soon-to-be released Volition. What they’ve done is to essentially capture the sound of the NWOAHM movement of the early 2000s and avoid the clean singing/melodic traps.

No doubt about it, Volition is an angry record. Each track is focused on groovy and thrashy licks, which owe some reverence to Lamb of God in particular. By no means is it a direct pull though, with some of the power behind the band’s music coming more from the extreme influences of death and thrash. The quintessence of the album is steeped in mid-tempo stomping, and they are practically guaranteed to get the blood flowing. From more crushing and methodical rhythms of “Order within Chaos” to more high energy movers and groovers like “Adrenalize” and “Love and War,” they keep things firing on all cylinders. There’s nothing but fury seething under the hood, and thankfully they don’t lean in too far on the more melodic end of the NWOAHM movement – they simply capitalize on sheer heaviness. That’s not to say that the guitarwork, particularly some of the solos, lack for melody. The grooves work to grab your attention, as does the leadwork (see “Sociopath”), in a way that’s melodic but not too over-the-top.

Death Rattle seize the moment with pure adrenaline from start to finish on Volition, even if it does occasionally lean somewhat heavily on familiar acts. If energy and groove is what you want, Death Rattle has it covered in a way that’s entertaining and punishing.