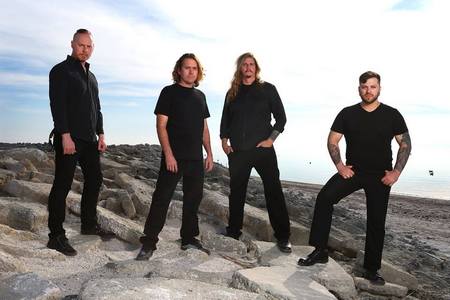 One band that has seen a rather meteoric rise in their status over the past few years is that of California’s Cattle Decapitation. The band has been going strong since 1996 and have seven albums under their belt. It seems their hard work has finally started to pay off for them, as opposed to the vast number of bands that start off strong and then peter out over the length of their career. Vocalist Travis Ryan does notice the oddity of this, stating “Most bands do the opposite. The first three records are their best ones. With us, it’s been our last three I feel. So that’s kind of weird. The fact that I’m forty and still doing it, that’s kind of weird. The same with Josh [Elmore]. We are a little bit like late bloomers I guess.”

As the years pass by though, it does get harder to maintain that dedication to touring and releasing new albums. It can take its toll on many bands throughout the years, particularly in today’s market. “It’s interesting. We don’t really do this for a living – we have day jobs. In order to do this for a living, it has to work financially for us. We are older – there’s that whole variable. A couple of us are married, we are trying to buy houses and stuff, and we live in one of the most expensive parts of the country,” explains Ryan.

But the band has carried on, and if The Harvest Floor started their upward movement within the genre, the follow-up, Monolith of Inhumanity solidified it. Many raved about the band’s combination of grind and death, yet being able to bring with it some sense of melody within the notable extremity. One of the key factors being Travis Ryan’s now signature vocal acrobatics, moving from ravenous screams to guttural lows to those melodic shrieks. One of the fan favorite tracks, “Forced Gender Reassignment” was given a video that many saw as a bit over the top. Ryan explains the controversy that followed its release. “I want to hear the best or most extreme thing. I assume that goes with visuals and people who are into horror movies and stuff too. We aren’t ones to just do something for the sake of gore. The ‘Forced Gender’ video was just an experiment. It was meant to be mean, cruel, and totally fucked up. A lot of people accused us of being over the top just for the sake of it. What people should have realized is, what if Cannibal Corpse did a video for ‘Entrails Ripped from a Virgin’s Cunt’ or ‘Necropedophile?’ That was 1993. Twenty years later and people are freaking the fuck out about this video.”

“It’s a testament to how far the video reached – we are talking about people who apparently don’t know what death metal is. The video wouldn’t have been so bad if it didn’t have this soundtrack to it. If you take extreme music and you put it to something like that, all of a sudden it’s gratuitous and gore for the sake of gore. It’s a music video, so people automatically assume that if you put music to it, you are glorifying something. In this experiment we discovered that people don’t want the ugly truth. And then there are the people that are like, ‘fuck yea bro! Fucking kill people, ahh!’ We made fans from that video and we lost fans too.”

With a highly revered album behind them, Cattle Decapitation went back to record once more at Flatline Audio with Dave Otero (who also recorded Monolith) to record The Anthropocene Extinction. “We knew a lot more of what to expect this time around with him involved, so that just helped the process a lot,” notes Ryan. “I love tracking with the guy. He and I are kind of telepathically linked. We always know what each other is thinking for the most part. That actually cuts out a lot of dialogue.”

Otero wasn’t the only person welcomed back by the band. The album’s fascinating artwork (a take on the albatrosses of the Midway Atoll that have died due to their intake of human garbage/plastic) was once again handled by long-time collaborator Wes Benscoter. “He’s my guy,” Ryan remarks. “He’s not exclusive to us by any means, he can work with whoever he wants – but he’s who I want to work with exclusively. He likes my ideas and I know he’s the one to make them happen. We work really well together, so that team isn’t going anywhere anytime soon.”

As per the band’s lyrical content, Cattle Decapitation continue their anti-human direction. Tackling issues such as the already mentioned Great Pacific Garbage Patch, animal testing of cosmetics, and human overpopulation, it surely comes across as a bit grim and dark. “It was a pretty depressing record to write because of that to be honest,” elaborates Ryan. “I’d done regular research on it [the Great Pacific Garbage Patch] for about a year straight, making sure I had things right – it was pretty damned depressing. We suck, as people.”

One doesn’t need to read too far into the news or Internet to find plenty of reasons to feel depressed about how far we’ve come as a society and the way we’ve treated our planet. So where does Ryan keep all of these ideas and potential song titles? In a readily accessible file for later use or disuse. “In LA, I may write something and think, ‘oh this is good.’ Then I’ll look at it and say, ‘yeah that actually sucks.’ I’ll take something away, I’ll reuse stuff. There’s a track, “The Burden of Seven Billion,” on the new album that became an intro. That was actually the working title for months. We thought it was a little too long, and someone thought it wasn’t brutal, so I ended up putting it on the backburner for a while. But yeah, it’s a work in progress. It’s a constant file I keep – I put it on my phone and my laptop. It’s constantly getting bigger, and now there’s Murder Construct stuff in there too.”

The Anthropocene Extinction offers a bleak outlook of our impact on the planet, but could the human race redeem themselves? “There’s too many people in the populated areas of this world,” notes Ryan. “Too much unchecked procreation. I almost think that movie Children of Man needs to happen, there needs to be a limit. Religion, morals, they all say different things. The populated areas of the world can’t sustain themselves, it’s unregulated.”

Currently finishing up this year’s edition of Summer Slaughter, it seems Cattle Decapitation will be slaves to the road for much longer in the months to come. “We are going to be doing some headline dates with King Parrot, Black Crown Initiate, and Dark Sermon – and then we are doing a big tour [Cannibal Corpse and Soreption] after that.” But that’s not all, as Cattle Decapitation fans know. The band always puts in some effort to creating a few music videos each time around and The Anthropocene Extinction will be no different. “We have a video being worked on right now,” concludes Ryan. “We are waiting for some footage. It’s sort of a first time we’ve done it like this. We haven’t had too much input, it’s mostly been the director. I’ve never been this ‘in the dark.’ Usually I work a little closer with the director. This one, I kinda gave him a loose idea. We’ll see. I’m looking forward to it, I’m kind of anxious as I had very little input.” So be it on the Internet or in the live setting, expect to see much of Cattle Decapitation between now and the end of 2015.