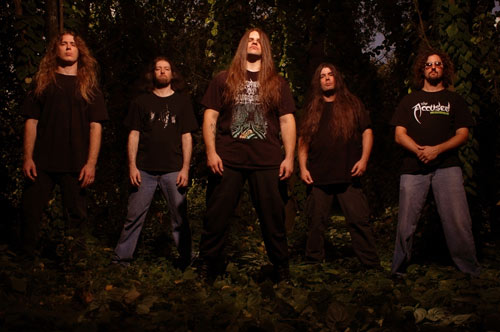 As tricky of a proposition death metal is, there’s only one constant and that’s Cannibal Corpse. While Morbid Angel is laying low, Obituary still making the rounds, and Deicide shooting itself in the foot, and several newbies vying for attention, Cannibal Corpse remains the preeminent brutal death metal band by a long-shot. Sure, there have been numerous bands who have tried to take a swipe at Cannibal’s crown (see: Nile, Behemoth, Six Feet Under as a wild card), the Tampa quartet are more vicious and dare we sayfresh than ever. Weird – brutal death metal that actually sustains itself.

Evisceration Plague is the name of the band’s 11th studio album and it picks up right where 2006’s Kill left off. Heavy on the rhythms, quick with the blasts, and of utmost importance – totally brutal, something that cannot be understated. Just check out “Scalding Hail,” “Evisceration Plague” and “Evidence in the Furnace” for some of the most agile, pounding death metal you’ll hear all year.

The new year should be busy for the band (who consist of singer George “Corpsegrinder” Fischer, guitarists Rob Barrett and Pat O’Brien, bassist Alex Webster and drummer Paul Mazukiewicz) and recently confirmed tours with The Faceless and a prime spot on The Rockstar Energy Drink Mayhem Festival should keep CC’s ugly mugs in our faces for the next 18 months. Better them than anyone else, so Blistering caught up with Webster shortly after the bassist returned home from a New Jersey video shoot for the title track.

Blistering.com: When winter rolls around, aren’t you glad you moved down to Florida?

Alex Webster: Yeah, it was freezing cold yesterday. It’s funny you ask, because here in Florida, it’s relatively cool – it’s not cold compared to up north by any stretch, but today’s it’s kinda cool, 50-degrees or something. For Florida, that’s a big deal. We just filmed in New Jersey and man, it was cold! We shot outdoors, standing in the snow and we’re not going to wear winter coats when we’re playing. I was wearing a t-shirt. My hands got cold and the bass stayed cold, but the rest of your body gets hot because you’re banging around all day.

Blistering.com: Do you remember what initially prompted you to move from Buffalo to Tampa?

Webster: The first time we ever heard about Tampa was with hearing about Morrisound Studios from the fact they did production for some of our favorite bands like Sepultura and Death, so we learned about it and figured that’s where we wanted to go and went there for the first album and it turned out good. We ended up doing four albums in Tampa commuting back and forth from Buffalo. We’d fly down, do the record and fly back home. Having done four albums there, we’d grown to really love the area. The cost of living was not any different than Buffalo and it might have been lower. Between the weather and studio location and it seemed like a place we should try, so the whole band said “Ok!” and we gave it a shot. Buffalo just had a really rough winter, so it was like, “Why not?”

Blistering.com: This is your 11th album. Are you surprised you’ve been able to maintain this level of quality?

Webster: I’m at a loss for words when I think about how crazy it is that we have 11 studio albums [laughs]. When we initially got signed, it was supposed to be a 7-year, 7-album deal with Metal Blade. We’ve tried to always get better. We always will try to work on improving as musicians and as songwriters, which in my opinion, is more important than becoming better musicians. The big goal is trying to better songs. Write heavier, more aggressive…better death metal. We don’t want to improve and become lighter in the process – that wouldn’t be an improvement at all. We’ve always been just working on it. We’re all really motivated…I’m not sure why other than we really enjoy what we’re doing and playing this kind of music. It’s so much fun that it’s easy to be motivated to work hard on it. Hopefully that shows through in our work.

Blistering.com: The first album, Eaten Back To Life wasn’t the technical force the rest of your albums are. What prompted you to start bringing up the technical ability of the band?

Webster: It’s a means to an end. The more know you about music, the better you are able to get the ideas from inside your head, to your fingers and then onto the CD. If you’re a better musician who knows more about things, you’ll be able to pull new things off. It’s a tool. Let’s say I’m thinking of a riff and it’s something that sounds difficult, once I teach myself how to play it, then it’s something I can do. I need to be able to play what’s going on in my head [laughs]. I have a hard time explaining that.

Blistering.com: One of the essential elements to your brutality has to be Paul’s drumming. How important is his blast style to your sound?

Webster: Paul is a very big part of our band’s sound. The way he plays drums is definitely different than a lot of death metal drummers. There’s continuity between all of our albums where you can tell the band you’re listening to is Cannibal Corpse and a big part of that is Paul’s drumming. He is actually in other ways, a very large contributor. He comes up with a lot of the song titles, he writes all the lyrics to Pat’s songs, and he is a good guitar player, too. On the past two albums, he’s written two songs completely by himself: “Submerged in Boiling Flesh” off the last one and “Carrion Sculpted Entity.”

Blistering.com: Where do you think the current guitar tandem of Pat and Rob stacks up to say, the Jack Owen/Bob Rusay or Jack Owen/Rob years?

Webster: I think it’s the best and that is with no disrespect to the other variations of our guitar teams. This is the best pairing that we’ve had just because they both have a very similar rhythm guitar sound and that’s the bulk of what any good metal band’s sound is going to be. What makes a band sound really amazing? It’s the whole band of course, but one of the most important factors is the rhythm guitar sound. Their rhythm playing is excellent and they play well together, plus they sound the same. They’re a great team, plus they sound solid as fuck when we’re up there playing.

Blistering.com: Some people still pine for Chris Barnes, but it appears the “Corpsegrinder” era of the band might be the defining era. Do you remember the overall vibe when you first brought him in for Vile?

Webster: We liked him from Monstrosity [Fischer’s former band], so after we asked Chris to leave the band…we already had George down there and when Chris got home after a couple of weeks, I asked him to leave and he was fine with that. We liked what George had and it was different. George didn’t like to do the really low stuff, that wasn’t his style – he didn’t sing like that in Monstrosity and he didn’t want to sing that style in the band. It’s apples and oranges… they’re both death metal singers, but you can really tell the difference with George and Chris. There are a few people out that imitated Chris and there are George imitators, but it’s not like we got a Chris Barnes imitator when we got George. We definitely got someone who had his own style that was a rapid-fire style. We really loved Monstrosity’s Imperial Doom record and thought no matter what, it will make our band better if we get him in there. And we still stand by that.