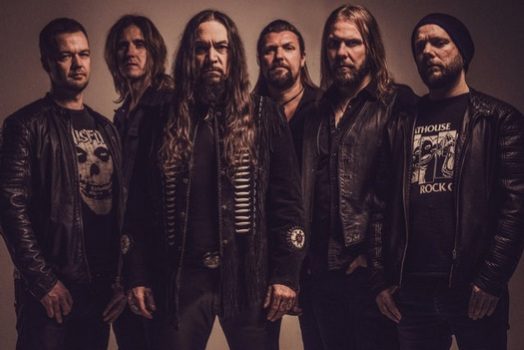 Few bands within the metal realms are as universally appreciated as Amorphis. Whether it’s their songwriting strengths or their compulsion to experiment and tinker with their sound throughout the years, they’ve been able to draw in a wide circle of fans without deviating from what they felt was the right course at the time. They’ve also been able to hit a bit of a second renaissance since vocalist Tomi Joutsen joined the band, delivering consistently excellent releases that somehow manage to up the high expectations the band always seems to face.

Upcoming album Queen of Time fits the billing for all of these descriptions above, with Amorphis somehow surpassing the admittedly high bar set before them and keeping their integrity completely intact as they merge the new and the old into an addictive cocktail. Guitarist and one of the founding members of the band, Tomi Koivusaari engaged us for a brief but engaging chat about Queen of Time, the evolution of Amorphis’ sound, and their upcoming return to the North American market.

Dead Rhetoric: With the band approaching the 30 year mark, do you feel that Amorphis is really intertwined into your life?

Tomi Koivusaari: Yeah, of course. We started the band when we were like 16-17 years old. We never thought it would be a lifetime project. But it has reached its second or third leg at this point. To me, now, I can’t think of life without this band. It’s been a nice journey.

Dead Rhetoric: What do you feel is the driving force behind Queen of Time at this point for Amorphis?

Koivusaari: I think it’s the same as it is every time. We aren’t going to just make a record just to tour and play the old stuff. I think we are really trying to do our best album every time. That’s our goal. We feel like we have done it again – but it takes like 10-15 years to see if you actually did it. But I do think this album is very strong. We have some strong albums, like Tales from the Thousand Lakes, Elegy, Tuonela, Skyforger, and Eclipse – I think this is going to be one of those albums. Production-wise and song-wise, it’s strong. So far we are very satisfied with it.

Dead Rhetoric: Did returning to work with Jens Bogren help to set the tone for what you wanted from the album?

Koivusaari: Definitely. We did 10 albums without a producer in the past, which was quite stressful. No one was taking the lead so we stressed about everything. We also had like six opinions all the time. For the Circle album, there was Peter Tagtgren who was kind of producing and he did a great job, but he wasn’t involved when we were rehearsing the songs. With Under the Red Cloud, it was the first time we had a real producer, Jens, and I think we hired him right after the recordings of Under the Red Cloud for [Queen of Time] because it’s not easy to go back from that kind of work [environment]. He’s a perfectionist and he wants everything to be just right in his opinion. If we didn’t make it with Jens, it would feel like we weren’t making it good enough.

Dead Rhetoric: So do you see that as the future of the band, in either working with him, or at least a producer of some sort?

Koivusaari: Yeah, at least somebody. I don’t know any reason why it wouldn’t continue to be Jens, but it’s too early to say what’s going to happen after touring and if he is available. But if he were to ask me know, I would hire him again. He’s like a seventh member of the band when working with us. That’s his style and he’s very dedicated to what he is doing.

Dead Rhetoric: What’s it like to have Olli-Pekka Laine back in the band after such a long time?

Koivusaari: It’s great – it feels like he never went anywhere. The first rehearsals we had, it felt so natural that we couldn’t even remember that he had been away for 17 years. His playing style is so familiar to us. We played quite differently with Niclas [Etelävuori] – he’s a much more straight-forward player and Olli-Pekka Laine is more of a classical bass player, playing a lot of notes and submelodies at the same time. It felt like, “Ok, here we are, and this is how it should go.” Now we have another original member inside the band – we didn’t want to have any session player or hire a stranger to play bass. We wanted someone 100% involved as we are. It’s great. It feels like we are still friends like when we formed the band.

Dead Rhetoric: Do you feel that departing and changing your sound over the years allowed you to hone in on what was most important?

Koivusaari: Afterwards, I think all the changes that we have done in the past, such as the different experiments within the music are things that we had to try to see if it was right or not. I think all of those albums are the reason we sound like we do now. We never wanted to put any limits on what we can or cannot do. We need to try everything. I’m still proud of every album we have made, even though I understand the record company [side] now that when we released Tuonela, it was like musical suicide [laughs]. It was so different, and we saw it on tour as well – people just pointing the middle finger. But when we played “Black Winter Day” they would be like “Yeah!” It was strange. But I think those sort of experiences made us do even more of those experiments. We figured we could do what we wanted, and we did. I think a lot of our fans like all of our albums as well, so it’s like the older fans have been on this journey with us.

Dead Rhetoric: As we were saying, at about 30 years in, what’s most important in Amorphis’ sound?

Koivusaari: That’s tough. I think we are trying to sound like ourselves. We have been trying to do that since Tales from the Thousand Lakes. We have been trying to sound different and unique in a way. Not that we want to do that, but we can make things that feel good and cool to us, even if some decisions have been strange to some people [laughs]. Of course, we take influence from everything we hear and what we are listening to. But we don’t want to sound like them. For instance, if we all listened to Slayer, we don’t want to make music like that because Slayer already does that. We don’t want to have riffs that sound like Slayer riffs. Sometimes we have nicknames for riffs like, let’s say “Slayer,” but everyone will play different things on top of it and it will change so that it’s not Slayer anymore but Amorphis. So we don’t think about it too much, but it’s the way we do things together.

Dead Rhetoric: Do you feel you are back in trying to conquer the tough North American market after last year’s tour and this upcoming one?

Koivusaari: Yeah – we did the last tour to see if we still had a fan base because there was a nine year break, and to us, it was a great experience and promising in every way. It was 7.5 weeks I think, which was a very long tour. But that tour was to see if there was a reason to come back again. And there is, I think. So this will be the first tour with this album – it’s a good package with Dark Tranquillity, Moonspell, and Omnium Gatherum. I really hope that everything goes well; we are really excited to go over there. The last tour was great, and nice to get back over there again after such a long time.