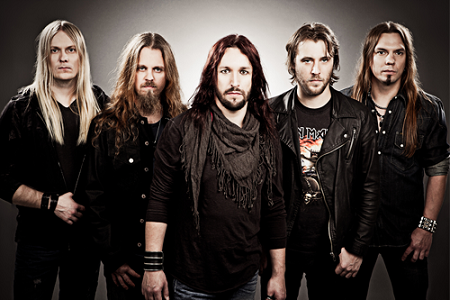 Doing homework after you get off stage…that’s a new one. Thanks to the keen eye of this scribe’s significant other, a member of local, pre-pubescent openers Critical Condition (or was it Condition Critical?) was spotted doing his homework at the band’s merchandise table, which was manned by the group’s parents. One could ponder the adult/son conversation: “Once you’re done playing, I want you to pack up your gear, load it into the minivan, say hi to your friends, and then get started on that geometry homework you’ve been putting off.” Talk about sucking the air out of things – one second you’re living your teenage rock dreams, the next you’re trying to dissect an isosceles triangle. Math is the worst.

On their first full North American run in support of this year’s Stones Grow Her Name, Finnish power metal heroes Sonata Arctica were paired with the Gene Simmons-backed Kobra and the Lotus, and unsung melodic death metallers Arsis, who held down the extreme portion of the bill. Attendance was as expected – full, but not really full, as patches of Pittsburgh’s melodic metal contingent were in attendance, having already been treated to Rhapsody of Fire, Symphony X, and Kamelot all in one calendar year. Since when did the ‘Burgh become a prime tour stop? Nevertheless, Canada’s Kobra and the Lotus were greeted warmly, based largely upon lead vocalist Kobra Paige’s stage appearance, which saw her donning some very Adam Ant-like face paint to go along with her leather get-up. The band’s standard and textbook European-styled power metal did compensate for Paige’s one-dimensional tone, as tracks like “50 Shades of Evil” and “Sanctuary” worked the room with ease. Whether Simmons will stick around to see a return on his investment remains to be seen. Money is scarce in power metal.

Arsis have endured a topsy-turvy run of late, with lead guitarist Nick Cordle having recently bolted for Arch Enemy, while main dude James Malone struggled to keep a stable lineup together, even taking a few tours off himself to tend to personal matters. However, the freshly-shorn Malone and new guitarist Brandon Ellis prove to be a formidable combination, able to achieve sonic clarity while a flurry of notes rang out on new cut “Six Coffins Wide” and “We Are the Nightmare,” a song that exemplifies the band’s noticeable flirtation with progressive death metal. Yet it was the brazen “Born to Rock” and “Face of My Innocence” that prompted a few punters to engage in mosh-action, including a lad that managed to surround himself with three women of the less-than-desirable variety. Seeing them mosh, then get “fresh” with each other was quite the eyesore.

It was no surprise Sonata Arctica leaned heavily on their recent output, forsaking their bountiful and saccharine early catalog. Understandable, given Tony Kakko’s reluctance to rehash old favorites like “Blank File” and “The Cage,” so the Finns flexed their muscle via mid-tempo numbers like “Shitload of Money,” “Broken” and “Alone in Heaven.” Kakko is all flash onstage; twirling his microphone stand, hamming it up for the crowd, maintaining the Euro-friendly style of showmanship that is a lost art in these parts. Set highlights include the graceful “Last Amazing Grays,” pulsating “Black Sheep” and closing round of “Replica” and “Don’t Say A Word,” a song that effectively set the tempo for Sonata Arctica’s present sound eight years ago. Commendable…they’re still on course, but man, how nice would it have been for them to launch into “Victoria’s Secret?”