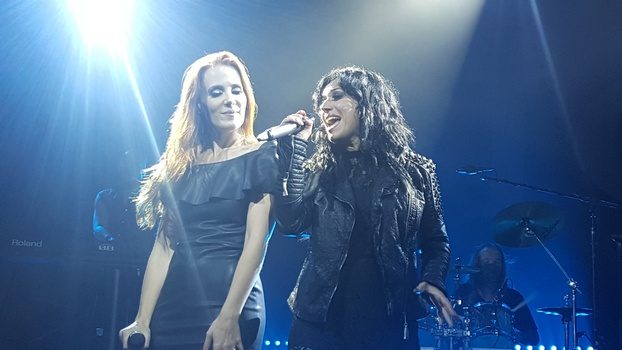 There’s always something extra special about being able to attend the last gig on a tour run. While the bands might be running on sleep exhaustion, you can usually bank on them catching one last ‘second wind’ to put everything out there one last time. This gig was put up on a particularly high pedestal, as Epica, Lacuna Coil, and Insomnium are all certainly capable of performing their own separate headlining tours. So to see all of them in one night made for a real treat.

This was the first time this scribe has hit the Playstation Theater, a somewhat large venue located on Broadway. Just to start things off, there was something particularly cool about seeing the glowing lights and billboard for the bands, right at the edge of Times Square. Not something one gets to see every day as a metal fan. Getting inside, the venue was a bit disorienting – thankfully I was brought backstage (for an interview with Insomnium) or else I feel I might still be in there somewhere lost behind the stage. Other than that, the Playstation Theater was a fantastic venue to catch a show – clean facilities and overall vibe, as well as some good sound (for the most part).

No local openers, so up first was Elantris. I originally reviewed their debut, This Sacrifice, back when they were still being called Blackthorne, so there was an eagerness to see if the young act could pull it off live, particularly with the three juggernauts they were touring with. They came out of the gates strong, and it seemed very clear that by the end of their set, they had convinced a good portion of the crowd to support their cause with songs like “Ellie,” “Strings of Silk,” and pirate-themed “Seas of Torment” striking a chord. Vocalists Thomas Ullom and Lindsay Victoria Ketchum had plenty of stage energy, encouraging the crowd to get involved and participate. Also cool was that Lacuna Coil drummer Ryan Folden helped the band out after their drummer, Erik Liber, was sidelined during the tour. The future seems bright for this act moving forward.

Insomnium hit the stage next, supporting last year’s excellent Winter’s Gate record. With their shorter set (they played 10 songs), they were only able to do 4 parts of said album, breaking into 2, 2-part pieces, but there was still something magical about hearing the beginning to that album in the live setting. One can only hope that they’ll be back for a full headlining gig to play it in its entirety (as they did in a few one-off headline shows on this run). Other than that, the band played a selection of strong cuts, with “While We Sleep,” “Mortal Share,” and “Ephemeral” being the most notable. Not having caught Insomnium in 10 years, they really impressed with their live energy, with Markus Vanhala, Jani Liimatainen, and Niilo Sevanen almost constantly interacting with each other on stage and zipping around (particarly Vanhala and Liimatainen) to engage the audience and dole out some guitar theatrics.

After catching Lacuna Coil on 4 occasions last year, they were the band I wanted to see the most – particularly with an emphasis on their most recent album Delirium this time around (it had just come out around the time of their last tour). They did not disappoint in the slightest, with new songs like “Ultima Ratio,” “Blood, Tears, Dust,” and “My Demons” being welcome additions alongside “Ghost in the Mist” and “The House of Shame.” The crowd was given a special treat, when Epica vocalist Simone Simons joined the band to help sing “Heaven’s a Lie,” which was easily one of the evening’s highlights. Later in the set, the band experienced some technical hiccups, and Cristina Scabbia sang a bit of AC/DC’s “Highway to Hell” to pass the time, going so far as to have one of the audience members, “Mike,” amusingly mouth the guitar solo. A fun impromptu interaction that just shows how on their game Lacuna Coil is in the live setting. Staples “Nothing Stands in Our Way,” “Trip the Darkness,” and “Our Truth” rounded out another fun and thoroughly enjoyable set. Perhaps we’ll get something next year on these shores in regards to the band’s 20th anniversary (fingers crossed).

An evening of great performances was capped off by Epica. Even with the bar raised by each successive band this evening, there’s nothing quite like watching the interactions between all members of Epica. There’s few bands that look like there are having as much genuine fun on stage as Epica does. The members are constantly moving front to back, left to right, and interacting with each other, smiling all the while. Keyboardist Coen Janssen even went into the crowd for a bit of surfing while playing at one point. Cristina Scabbia returned the favor to Simone Simons and came on stage to aid in “Storm the Sorrow,” which proved to be just as much of a pleasure as during Lacuna Coil’s set – getting to see not one, but two Cristina/Simone duets is not the sort of thing you hear about every day. The interaction between Scabbia and Simons seemed to sum up the gig in itself – a fun, family type of vibe that doesn’t come around with every tour you see nowadays.

In terms of the band’s setlist, whereas last time focused heavily on The Holographic Principle, this one was a bit more balanced, with other songs like “The Essence of Silence,” “Cry for the Moon,” “Reverence,” “Unleashed,” “Victims of Contagion,” and “Sancta Terra” giving more variety in addition to “Wheel of Destiny” (from The Solace System EP), “Dancing in a Hurricane,” Edge of the Blade,” and the bouncy closer “Beyond the Matrix.” Things ended with a wall of death for “Consign to Oblivion,” and some group pictures with all the bands onstage to conclude the tour. A great tour package that delivered from beginning to end.