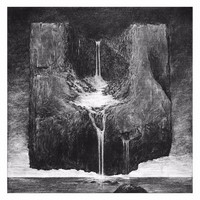 Furthering the case that Iceland is making waves in the extreme metal scene (alongside Kontinuum and Cult of Lilith), Zhrine is next in line to become a larger name on your list to check out. Comprised of ex-Gone Postal members, Unortheta presents a vision of blackened death metal that is not only soaked in misery and oppression, but also a sense of wonder.

Taking some cues from the post-world, Zhrine utilizes atmosphere to keep themselves apart from the pack. Some songs begin with some more ambient tones, bringing in a sense of melancholy and darkness that gives the usual heaviness a lift in spirit (“Utopian Warfare,” “World,” and the title track). But this sense is not limited to the opening acts of their songs, with songs like “The Syringe Dance” using the atmospheric layering to add some nuance as the song comes to a close, or “The Earth Inhaled” sprinkling in some softer moments throughout the song’s progression. The bottom line is that it doesn’t feel like a cheaply employed and predictable gimmick. The melodies that permeate the otherwise abrasive black/death landscape add a feeling, but for those looking for the darker side, “Empire” and “Spewing Gloom” are sure to find favor in anyone’s quest for black/death/doom that pleasantly doesn’t go down the same road of many an Incantation-clone.

Unortheta is a crushing display that is able to mold and wield somewhat melodic atmosphere that doesn’t feel out of place. It also offers the band a lot of potential growth should they want to wander further down one of the many paths that they have broken into with future works. An all but certain sleeper hit for this spring.