Zero Down – No Limit to the Evil (Minotauro Records) 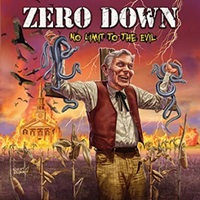 If the cover art weren’t so prototypical Ed Repka-oriented, the church burning, snake holding preacher man on the cross would make me believe we would be in for a black metal record – but alas, No Limit to the Evil is the fourth full-length record for Seattle’s Zero Down. Digging deep into their personnel (they’ve been together since 2002) you’ll notice one seasoned member in guitarist Matt Fox, who also performs in the thrash band Bitter End (yes the one on Metal Blade in the early 90’s). However in this quintet, straight forward heavy metal is the model bursting forth from the speakers, albeit through occasional punk attitude and spunkiness.

Lenny Burnett and Mr. Fox as card carrying, six string axe members throw down a bevy of bluesy-oriented harmonies and hooks, most in line with those familiar to Thin Lizzy, Accept, or Judas Priest catalogs, as “Cold Winters Night” and the high octane “Phantom Host” offer. The occasional tip of the cap punk-wise probably comes up in the tempo choices for drummer Tyler Lindsley as well as the attitude and choice of delivery vocalist Mark Hawkinson employs. The quick hitting “Two Ton Hammer” with its bass/drum syncopation as well the low end fueled “Steve McQueen” contain a lot of the sneer and grime that make them cross-genre appealers to NWOBHM maniacs and possibly fans of early punk.

Not as smooth as say the Scandinavian brigade performing in this way like Enforcer or The Dagger, Zero Down possess a little more grit in terms of tone and production values that probably refuels the 70’s and early 80’s throwback thoughts. The gang vocals during “Return of the Godz” and the title track come off a touch weak, probably best served in more of a Hallows Eve type band because Zero Down already have enough firepower musically to not succumb to these call and response tricks.

Still, Zero Down provides moderate entertainment value to fuel your metal drinking needs, and No Limit to the Evil could find a home in a few record collections for sure, as it only takes up normal vinyl time to consume.