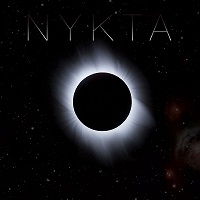 Greece’s Zemial is a one man show of Archon Vorskaath, a man who probably never feels the pressure of time constraints.  Zemial’s first full-length effort was brought forth back in 1996, but he waited an entire decade to release its follow-up In Monumentum.  Bringing us up to the present is the third album Nykta, releasing 7 years after its predecessor.

To say that Nykta is a hodge-podge is an understatement.  Everything from first-generation black metal, to traditional NWOBHM, to punk, thrash, and psychedelic prog is covered here in an old school production over the hour-long run time.  The mix does mesh surprisingly well, and it opens strong with the first three tracks laying out the groundwork for the genre ping-ponging to come.

Sadly, the album’s two lengthiest tracks, “In the Arms of Hades” and “Pharos,” are needlessly long, with the latter soaking in mostly droning ambiance for the final third of the track.  “In the Arms of Hades” also features some hokey “evil” vocals and “Pharos” includes some equally goofy spoken word and laughter.  Many of the later tracks, with the exception of the assaulting black metal of “Deathspell,”  just don’t have the same listener engagement of the opening trio.  To add insult to injury, the final “track” is four and a half minutes of silence, in reverence to John Cage’s “4:33”.  It was meant to allow the listener to absorb the music that just transpired, but on an album that already has overextended it’s welcome, it comes across as somewhat pompous, and honestly, a bit douchey.

One cannot fault the ambition of Vorskaath with Nykta.  Unfortunately, the execution doesn’t quite match up with its vision.  Maybe that is why many bands have a number of members, if only to occasionally say, “I think you’ve gone far enough here, maybe cut this song down a bit.”