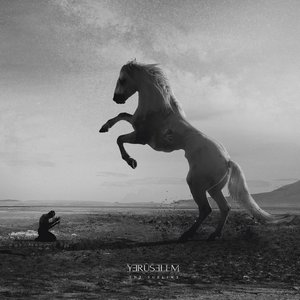 Darkened streets lit largely by distant neon underneath one oppressive night sky or another are exactly the kind of backdrop you can expect to conjure while listening to The Sublime. The new work of Blut Aus Nord’s Vindsval and W.D. Feld continues the language developed through the 777 album trilogy. From the beginning that will likely determine whether or not The Sublime is your cup of tea.

And what a peculiar cup of tea it is. The harsh industrial marches of classic Godflesh (drum machines forever) grind out a thick bottom end while melodic synth backdrops and dissonant guitar are draped overtop. A moderate pace and a focus on density defines The Sublime and often (for better or worse) gives it a uniformity that is easy to become lost in. This isn’t inherently negative as the suffocating atmosphere is pervasive throughout “Eternal” “Joyless” or “Reverso” and is part of what give The Sublime its essence.

Dynamic though it is not.

The album is not with out its highlights as “Triiunity” has an absolutely disgusting bass riff that runs throughout its duration, seething with an attitude every alterna/nü-metal band in the late 90s strove for and failed to deliver. Interlude-like tracks pepper the setlist and make for temporary breaks of light in what is otherwise a uniform presentation of the endless dark.

So perhaps it was unfair to say The Sublime is only a continuation of that found in the 777 albums. It shares indeed much with the many other instances of the Blut Aus Nord canon that have an industrial touch. The Sublime is distinctly lacking any particular black metal touch, however, and it may be that this album is a way to express those sonic ideas that have been popping up off and on in Blut Aus Nord but in a more focused way.

Fortunately at a compact 36 minutes The Sublime is in and out quickly. Unfortunately it’s possible the entire album could go by and you may only notice one or two changes (”Triiiunity” notwithstanding). A uniformity in sound can be a great thing but it can also come across like a sonic fog. There are points throughout The Sublime where both are true, but it is an effective (and perhaps exhausting) journey into a deep mechanical void.