Year of the Cobra – Ash and Dust (Prophecy Productions) 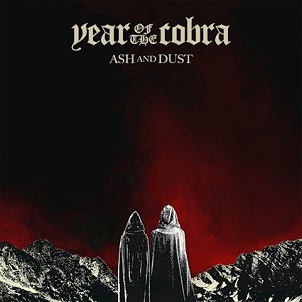 One of the quickest routes to sludge, apparently, is by foregoing the guitar and having the bass do all of the distortion heavy-lifting. Perhaps Cliff Burton is to blame for all of this: His legendary “(Anesthesia) Pulling Teeth” instrumental was the metallic entry point for the bass substituting for the guitar. While it’s possible Burton never foresaw the true genius and impact of his work, the bass, when applied rigidly and supplied by someone who knows what they’re doing, can be more than just the bottom-end supplier. Such is the approach for Seattle’s Year of the Cobra, who have made the jump to Prophecy Productions for the release of their second full-length, Ash and Dust.

Produced by the similarly-legendary Jack Endino (Nirvana, Soundgarden, High on Fire), Ash and Dust — as with most Endino production jobs — carries the sort of raw, unpolished streak that he’s rather capably made a career out of. The Year of the Cobra duo of Amy Tung Barrysmith (bass/vocals) and Johanes Barrysmith (drums) zig-zag around eight songs that bootleg off sludge, then into pop, punk and grunge territory, sometimes with great impact, like on the surprisingly caressing “At the Edge,” where Tung-Barrysmith’s poppy voice ties on some alternative rock phrasings.

But since Ash and Dust contains such a wide assortment of sounds and ideas, you sometimes get the feeling Year of the Cobra are trying to herd them all into one spot and haven’t really found their rightful landing place. The bass action of Tung-Barrysmith is impressive, though, yet it’s possibly not the right tool at this time for a band still trying to figure things out.