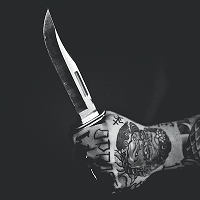 YAITW translates to “Young and in the Way,” which to these ears, makes for one of the better monikers going. It’s like those darn kids with their darn cell phones: Young, and certainly in the way. Can’t draw it up any better than that, especially for us rapidly-aging folk. Anyway, the band formed in Charlotte, NC in 2009, and have one prior release under their belts, 2011’s I Am Not What I Am. Their sound is appropriated as blackened crust metal, although we can drop any references with the word “black.” When Life Comes to Death is more straightforward than others make it out to be…

Circling somewhat of the same runway as Noisem and any number of the faceless d-beat/crust acts parading around on Southern Lord, the band is prone to those obnoxiously loud guitar/drum up-tempo tandems where attitude is placed over technicality. The rare sideways, somewhat Scandinavian riff will pop up infrequently, like on “Betrayed by Light” or “Shadow of Murder,” but for the most part, the band relies on its own frustrations with the world to convey their point. However, should more tunes like the expansive, well-plodded “Embrace Extinction” emerge down the road, then YAITW would have a better seat at the would-be BM table. For the most part, though, When Life Comes to Death puts its head down and goes into a blind rage.

Given the band’s relatively young age (Question: Should the band’s career progress past the ten-year mark, will they change their name to Old and in the Way? Probably not), the overarching blunt aggression found across the album’s running order should put YAITW in prime position for increased exposure. Another solid find for Deathwish.