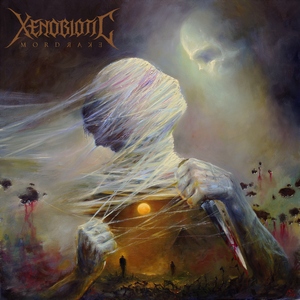 After being snagged by Unique Leader following their first full-length, Prometheus (of which they reissued later that year), Xenobiotic returns with their sophomore effort. With a few line-up changes in toe, Mordrake pulls in some new adjustments to their sound and widens their palette of influences. But with some deathcore ‘habits’ still in effect, it does dampen the overall feel.

Starting with the good, there’s a larger breadth of influences to find, with some blackened vibes (“Light that Burns the Sky”), a few clean vocals (“Saphris”), and a ton of atmosphere to be found amid the deathcore/tech-death hybrid’s newest. Some of the atmosphere gives it a more emotional resonance, as in the case of the two songs already mentioned. It’s gripping, and it will resonant after the ending of the album. Some moments of blistering speed don’t hurt the band either, allowing some of the tech-y flash to stand out (“Inverted”). But ultimately it’s not enough to give Mordrake the lasting impact that a few songs feel deserving of. For many of the tracks, there are two things plaguing them. The first is that the atmosphere feels so Fallujah-esque that it’s hard not to think of it as anything but. While in some ways it could be a compliment, the fact remains that it’s so close in tone one could start to bring up a plagiarism argument. While this only applies to the moments of atmosphere added (see “Fractured”), the number of chugs in other tracks also makes it hard for things to stand out with the exceptions noted above. “Acedia” is brutal, but still has an overwhelming straight-up deathcore feel, and begins to drone on as it progresses. Lastly, the tone feels very uniform beginning to end. Even with some tips of the hat in variation, the overall runtime of 46-minutes makes it a bit of a chore to sit through in one go – things begin to feel like they are repeating themselves.

With some of the standout moments in a few tracks, it’s hard not to root for Xenobiotic but Mordrake doesn’t leave as strong of an impression as it could. Some greater tempo switch-ups, a more unique atmospheric vibe, and less reliance on the deathcore chugs could all strengthen the act moving forward.