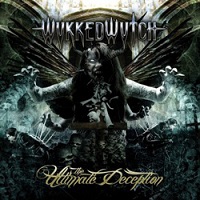 A band that has taken a perpetual beating from the metal press, Wykked Wytch have proven equally adept at getting up from the mat and aping Cradle of Filth at the same time. Granted, they are a female version of COF, with long-entrenched frontwman Ipek holding down the microphone for nearly two decades. They must be doing something right if they’ve been able to hang around this long, and on The Ultimate Deception, they’re surprisingly agile, predictably Filth-like, and more importantly, not annoying.

Ipek is joined by drum luminary Kevin Talley (Dying Fetus, Misery Index, Six Feet Under, etc.) and new guitarist Nate Poulson, who appears to have been given the green light to do as he pleased across the album’s ten songs

. Probably a smart move showcasing Poulson, as the guitarist has some serious chops of the neo-classical variety, to go along with a firm handle on the various modes that extreme metal has under its umbrella. Furthermore, the man doles out some jagged melodies on “Serpents Among Us” and album highlight “When the Sleepers Rise.”

It’s hard to decipher if Ipek is WW’s biggest asset or hindrance. Her Filth bellows have ample weight underneath them during the rapid-fire portions of “Birthing the Beast,” and she kicks into a black metal rasp on “Prayers of the Decapitated.” However, she suffers from the same issue her male counterpart suffers from – she doesn’t know when to keep quiet and let the music do the talking. Still, as a redeemer, the band’s cover of Metallica’s “Fade to Black” manages to not stumble over itself, a credit to Poulson and Ipek’s marginally enjoyable clean vocals.

A band like Wykked Wytch has the misfortune of having their reputation precede themselves, so it’s a fair assumption the band walks around with a “Buyer Beware” tag smacked on their foreheads. Nevertheless, there’s not a lot to rail about in regards to The Ultimate Deception, and if there weren’t some band from England with a pint-sized singer

doing the same thing, then Wykked Wytch would have to face critical wrath on a much, much larger scale.