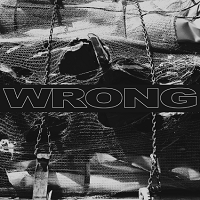 Slotted—perhaps to a fault—as this decade’s answer to Helmet, Wrong are comprised of a few lads who have done time in such notables as Torche, Kylesa, and Capsule. So in effect, this isn’t some spin-off featuring death metal castoffs looking to scratch their ‘90s itch. But that’s what Wrong does almost shamelessly across their 11-song self-titled debut. It’s almost a total grunge and alternative rehash, just shuttled through the lens of heavier guitars, absent of the commercial hemming and hawing that was all the rage when major labels were in love with the sound.

The album’s focus is “the riff.” There’s few strains of melody, vocal inflection (Eric Hernandez keeps his bark suitably monotone and one-dimensional), so it’s really a matter of facing off with meaty power chords and crash-bang-wallop drums. The sideways punk/hardcore angle of “Turn In” has its merits, especially with its open, bopping main riff. The subterranean, Seattle-living and loving “Entourage” and Helmet-esque “Hum Drum” occasionally veer too far into sleeve-wearing territory. (While both are not total knock-offs, they’re pretty darn close.) However, the pendulum shifts properly with “Stasis,” boasting the album’s heaviest and swiftest riff, one that wouldn’t be out of reach for Torche when they’re actually motivated.

Not a terrible surprise we’re getting back around to the ‘90s, something the fine folks at Relapse (and in Wrong) had in mind. Whereas in the ‘90s, a release such as this would have been pinned to FM radio, polished, and perhaps gussied up with flannel and boots, it’s going to run through the underground firing squad, where many may not take a liking to being reminded of how difficult said decade was for real metal. Real metal nor not, grunge or not, Wrong’s self-titled is going to polarize. Just like they intended.