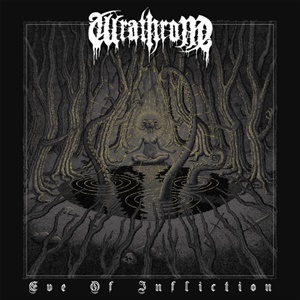 Originally appearing on this scribe’s aural radar through their debut album Born Beneath, Wrathrone are a Finnish act that blend together a solid old school Swedish death metal approach with some traditional/rock ‘n’ roll aspects to their sound. Four-fifths of the quintet have been together almost since their 2008 beginnings – ensuring a cohesive outlook and solid chemistry with where they wish to go musically. Eve of Infliction as the third album represents the best template as to what the group gives – laying down a thick slab of HM2-inspired riffs, sick growls/screams, as well as versatile rhythm section parts that can go full force and lay into a solid rocking groove at a moment’s notice.

The guitar work has a dirty, low-toned nature that can also mix things up with these lightning quick tremolo runs or Maiden-esque circular melodic breaks. Both aspects from guitarists Vili Mäkinen and Lauri Holm come into play throughout the record – check out “We Feast on Fear” for some Dismember/Entombed punk/death speed picking while the back third of “Leader of the Past” sees the axe team lean heavily on some Smith/Murray-ish harmonization. Most of the material whirls by in three to four-minute intervals, but the longest cut “Infliction” at 6:25 features a slow building, ominous introduction that shifts into gear quickly, the snare/cymbal hits furious against a relatively doom-based riff parade, vocalist Matti Vehmas matching the atmosphere in raspy growl precision while bassist P. Wärri gives some interesting twists during specific instrumental sections that heighten the bouncy groove. Keeping the material sharp and on point, it’s a quick moving record at 32 minutes and change – ideal for a get in, get out, leave you wanting more return. Rarely do you find a Finnish act willing to use the 90’s Sunlight Studios-style template and add in their own rock/traditional metal influences to create an addictive, potent sound – but Wrathrone succeed because they never stay stuck in one gear or tempo, always mixing up the faster songs like “As the Knife Comes Deep” with a stop/start diverse headbanger like “Darkness Concealing Chaos”.

We know the old school movement has come back in spades based on the number of newer bands/releases in all parts of the world. Add Wrathrone to that must hear list – solid songwriting and execution to entertain the death masses.