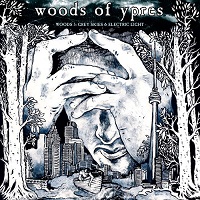 Unfortunately, this is a posthumous release given the untimely passing of Woods mainman David Gold this past December. Gold was killed in a car accident near his hometown in Barrie, Ontario at the young age of 31, becoming another in a long line of musicians gone too soon. All things considered, it’s hard to not get swept up in the ironic nature of a lot of the songtitles on Woods of Ypres – Woods 5: Grey Skies and Electric Light…they’re almost chilling when you think about it.

Once a full-fledged black metal band that leaned heavily on the now en vogue Cascadian sound (Agalloch, Wolves in the Throne Room, et al), Woods over time moved into svelte Goth metal territory. This is most evident in Gold’s vocals, where he does a full-on Peter Steele impersonation throughout the album’s 11 cuts. At times, it’s passable, as on opener “Career Suicide (Is Not Real Suicide),” other times, it’s really annoying and contrived, especially on “Finality,” which is a syrupy piano ballad that is a total miss.

Still, there are several songs worth getting excited about, most notably the forlorn “Travelling Alone,” which employs some 80’s alt-rock melodies, “Alternate Ending,” which is sublimely morose, and the two-part “Kiss My Ashes Goodbye,” a pair of songs that come across as a little too “real” given the circumstances. WOY’s black metal tendencies seem to be a thing of the past, with only a few moments that would recall the band’s early days, like on “Lightning and Snow.”

One could hear where Gold wanted to take Woods after Woods 5: Grey Skies and Electric Light, and obviously, it’s a shame none of it will come to fruition barring the release of previously-unheard material. Nevertheless, Woods 5stands on its merit with or without the extenuating circumstances. Gold will be missed.