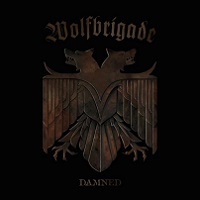 With Unleashed being the only classic Swedish death metal band still releasing albums worth a salt (sorry, Grave is WAY overrated), many are starting to turn to the d-beat scene for their Stockholm fix. The likes of Disfear, Black Breath, and the band in question, Wolfbrigade have come to embody a sound that while is still very much metal, has the intrinsic elements of punk, thus making them sound more reckless and dirty. So yeah, Damned(the band’s 8th full-length, even counting their Wolfpack days) is pretty much what the doctor ordered.

Formed in 1995, which would have put them right smack-dab in the middle of the first death metal scene implosion, Wolfbrigade play a crusty brand of d-beat that relies heavily on grinding riffs and the occasional jab of melody – just reference the closing portions of “Ride the Steel.” Yet after the album puts its head down on opener “Feed the Flames,” Wolfbrigade find their groove, hitting upon some vicious and crisp moments on “Hurricane Veins,” (love those early 90’s melodies) the chunky “Catch 22” and punky “Damned to Madness.”

Reportedly the band is flip-flopping on whether to remain as a band or not, so if this happens to be their final go at things, then Wolfbrigade is going out in top form. Like most albums of this nature, Damned doesn’t split hairs or jostle around. It’s brutally right to the point, and even the slightly more adventurous jams like “Ride the Steel” should help them create some type of separation from the very uniform d-beat scene.