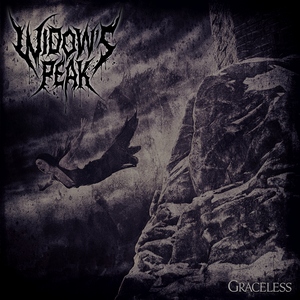 In the battering and bludgeoning world of modern death metal, it’s often a case of being able to make your material stand out while still employing the same level of violence and gusto to keep pace with the scene. Like much of metal, it’s a balancing act that must be learned and practiced. Canadian act Widow’s Peak give it their all on their debut EP, and it’s clear they are heading in the right direction.

Graceless is a 20-minute dosage of brutal modern death metal with some trimmings set in motion to keep it interesting. It does tend to sit at the more technical side of things, without going too far over the top (think more along the lines of Cattle Decapitation than say, Augury), and the use of bass is something that is going to help them out in the long run. The music packs a downright feral punch at most points along the way, with sometimes explosive groove aiding in the visceral segment of things, but it doesn’t stop some melody from infusing itself at some points (like the admittedly strong closing title track). Alas, it feels quite balanced for a debut performance. The only thing bringing it down slightly is that it doesn’t ever really move beyond the expected for this type of material – though it does bode well for the band to have such a solid introduction.

Appealing to many death metal walks of life on their debut, Widow’s Peak set the stage for more grand things to come in their future with Graceless. It’s a solid taste of what they can do, and hopefully lays the groundwork for more expansive material to come in the future.