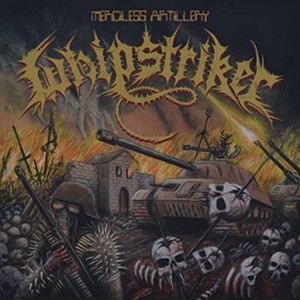 Spreading their wares through many ‘old school’ split release methods (18 according to Metal-Archives since 2010), Brazilian act Whipstriker certainly subscribe to an underground, DIY philosophy in getting their brand of speed/heavy metal across. Right down to the logo, bullet-belt adorned imagery, and menacing stage names like Witchcaptor, Doomhammer, and Skullkrusher for the other three members, the quartet aim for the heart and soul of raw, unabashed mayhem – relentless in the pursuit of songwriting that conveys proper respect for the 80’s influences they wish to bring to the current generation. Merciless Artillery is the band’s third full-length, originally released on their own before Hells Headbangers picked them up, serving up a half hour of tracks to conjure up those evil thrills and darker, war-torn periods of youth.

The Whipstriker formula is fairly simple: serve up two-three speed-oriented riffs per song, add in the proper melodic heavy metal accents during subsequent transitions, and surround it with thunderous drums/whirlwind fills and distant roars and screams vocally. Witchcaptor and Doomhammer aren’t the most technically proficient axe masters yet know how to get the job done – slicing and dicing through cuts like “Rape of Freedom” and ode to Venom “Mantas’ Black Mass” with varying degrees of mid-tempo to faster chord progressions. Whipstriker as a bassist and vocalist lashes out in imposing desperation, channeling his inner Cronos, Bathory or even King Fowley during standout moments such as the thunderstorm filled title track plus shorter, pounding anthem “Warspell” – the latter a fine switch-up tempo-wise during the late stages of the record. Nothing fancy about this material – it’s very much a plug in, go for it mentality that put early Venom, Warfare, Sodom, and Exciter on the map, sprinkling in a NWOBHM/melodic touch during some of the lead breaks to engage that retention factor that keeps listeners coming back for more.

For every band that’s attempting to cross-pollinate their sound, you have a polar opposite who subscribes to a specific time period in metal and doesn’t deviate from that course. Merciless Artillery proves primal speed/heavy metal will never die, and that Whipstriker can cultivate legions who missed that boat the first go around.